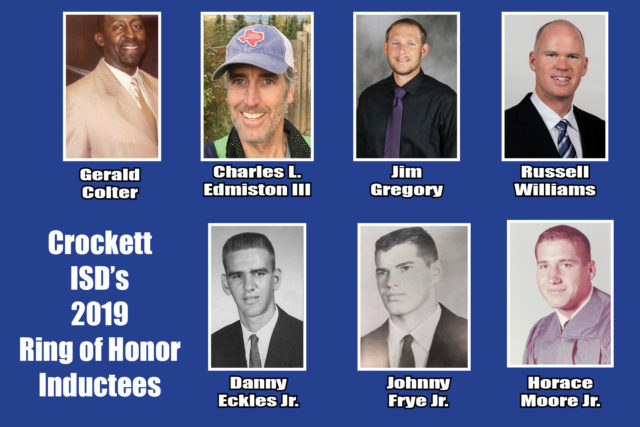 CROCKETT – The Crockett Independent School District will induct seven new members into an exclusive fraternity on Friday, Oct. 25 during a pregame ceremony held in the Crockett High School Commons area.

This fraternity includes doctors, lawyers, professional athletes, teachers, coaches, mayors, city council members, a congressman and just plain old folks who made a significant contribution to the betterment of the school system in Crockett. It is the Ring of Honor.

This Class of 2019 is composed of seven inductees. They are: Gerald Colter; Charles L. Edmiston III; Jim Gregory; and Russell Williams. Danny Eckles Jr., Johnny Frye Jr., and Horace Moore Jr. are all being inducted posthumously.

A prepared statement from Crockett ISD Superintendent Terry Myers read, “On behalf of the board of trustees, administration and staff, I want to extend a hearty welcome and congratulations on being selected for the Crockett ISD Ring of Honor. You were chosen for your contributions to the Crockett school communities. You are part of a rich legacy and demonstrate a road map for success for young people today.”

He further stated, “The Ring of Honor represents the hard work and extra effort it takes to reach standards of excellence in your lives. Thanks to all of you for that effort. There is a process in place to add new names annually to the Ring of Honor. An announcement will be made in 2020. This announcement will be starting the application process for the selection of the 2020 honorees. Thank you for being here today. We at Crockett ISD wish you and/or family representatives the very best in the future. God bless you all.”

Gerald Colter, son of Port A. and Theresa Colter, is a 1985 graduate of Crockett High School. He has three siblings: Regina, Sharon and Doug.

He married his high school sweetheart, Kathy; and they have three children: Charles, Teneisha and Gerlisa. They also have three grandchildren.

During high school, Colter participated in football, basketball, baseball and FFA throughout grades 9-12. He received the Ag Mechanic Student of the Year award in grades 11-12. He also received an Associates’ Degree in Auto Mechanics at Texas State Technical Institute in Waco.

Colter retired from the Texas Department of Transportation in 2018 with 30 years of service, and served 14 years as a supervisor of Houston County. He now works part time for the City of Crockett.

Colter is a member of Bethel Missionary Baptist Church, where he serves as assistant chairman, youth mentor and boys’ Sunday school teacher.

“I believe in putting God first and reaching for the stars, because any goal is attainable with God on your side,” Colter said.

Charles L. Edmiston, III was born on October 13, 1965, in Crockett, Texas. He graduated from Crockett High School in 1984 and graduated from the University of Texas in Austin

After graduation, Edmiston decided that the advertising industry wasn’t for him, and chose instead to backpack around Australia, Fiji and New Zealand. He needed a trade for travel and found cooking. In Manhattan, Edmiston started attending an internship that allowed him to work and go to school, supplementing the tuition cost.

After cooking school, he worked in New York, Austin and eventually Southeast Alaska where he found a job cooking on a small tour boat. He worked for the company for five years, eventually ending up driving a bus in Denali National Park. At the same time, he also got into photography. Once again the travel bug hit him, where he found himself in Alaska.

Edmiston met his wife, Susan, at a cousin’s wedding in Houston. Susan is a Mohs (Dermatological) surgeon in Austin with her own practice. They have two children. Chloe is in her senior year at Rice University in Houston. Brant is a junior at Austin High School.

Jim Gregory attended Crockett schools from K-12th grade. His love for all sports began at an early age. A fond memory from his youth was going to the 1990 State Football Championship with his dad and cousin. From that point on, he could not wait to participate in athletics for Crockett High School. Another cool sports experience in his life was remodeling the old football fieldhouse into a YMCA. Stepping into that place was like a walk back in time.

“My imagination of all the things that took place there was filled in by true stories from Ring of Honor members like my father, Danny Minter, Randy Allee, and others. As a teenager, it was cool watching videos of their old playing days. My father, Reggie Gregory, a 2014 inductee, had a great high school career. In fact, this year marks 50 years since his high school graduation, so the timing of this induction is remarkable. I wanted to be just as good as he was and try to live up to the reputation he had established,” Gregory said. “He pushed me to excel, and he was my biggest support along with my mother.”

Gregory would like to thank his parents for their support, guidance, motivation, encouragement, prayers, and time spent making him a better man and helping him achieve his goals.

“I also want to thank my four sisters: Heather Pierce, Stacy Davidson, Melinda Tadlock, and Michelle Dishongh for standing by my side and supporting me through many games and life. God put me in a family that valued faith, education, and sports in that order. I thank God for giving me the opportunity, talents, and knowledge to experience many achievements in sports and school,” Gregory said.

Gregory said he was fortunate to have many excellent coaches and teachers that contributed to his success, and he is grateful for their efforts to help him reach his potential.

After college, Gregory spent five years working in the retail industry. Then he began his coaching and teaching career at Latexo, thanks to Stacie Easterly. Ten years later, he is now coaching football and baseball at Willis High School. He has spent time at Central, Cleveland, and Houston Austin high schools along the way.

“Now I am married to my lovely wife Charity. She has been a tremendous support throughout my coaching endeavors, and I am grateful for her. We have three amazing children: Landon, Holly, and Knox. They are the light of my life, and I am so blessed to have a happy family,” Gregory said.

Lastly, Gregory thanked the Ring of Honor Committee for nominating him to join this prestigious group of men and women.

“I am greatly honored and will cherish this achievement forever. Once a Bulldog, always a Bulldog; Go, Big Blue!” Gregory said.

Russell Williams is a ’92 graduate from Crockett High School and 3-sport AAA letterman – football (2 years), basketball (2 years), and golf (4 years) and member of the ’91 Academic Decathlon team that won three state medals. Russell was part of the ’90 State Finalist football team who went 15-1, and was the Bulldog starting QB in the ’91 season (his senior year) with a 9-1 record earning AAA All-District individual honors. Russell won multiple golf tournaments over his high school golf career including two AAA individual regional runner-ups both his junior and senior year (’91 & ’92) and successfully finished 4th individually at the ’92 AAA State Golf Tournament in Austin.

After high school, Russell played golf on a full scholarship, where he graduated in ‘97 at Stephen F. Austin State University, and was nominated captain by his teammates; they qualified for the ’96 NCAA Division I Central Region Finals in Ann Arbor, MI. Russell was medalist that year for SFA’s team and finished top 25 individually at the tourney. Russell went on to earn All Southland Conference individual honors in ’97 along with SFA’s prestigious Murray Shaw Scholarship Award for academic and athletic excellence for the ’96-97 year. In 2003, he earned his MBA at University of Dallas Graduate School of Management.

After college, Russell spent three years (’98-’01) at Adams Golf Co. where he traveled the PGA and Sr. PGA Tours and was the face of Adams Golf working directly with the tour players.

At the beginning of ’01, Russell transitioned his career to the human resources consulting firm of Lee Hecht Harrison (LHH) as a Business Developer, then moved into management in ’06 and worked his way up to today – where he is the SVP, USA Country Manager responsible for all of the U.S. (96 offices). LHH has over 400 offices in 64 countries, and they help organizations simplify the complexity associated with transforming their leadership and workforce so they can accelerate their results with less risk by helping employees navigate change, become better leaders, and develop better careers.

Russell currently lives in Prosper, Texas (far north Dallas) with his wife Amanda of 19 years and their two children, Marcus (15) and Maggie (13.) They have a second home here in Crockett where they spend the summers and most holidays.

His dream is to move back permanently and retire in what he refers to as “paradise in the pines and the most genuine people in the world.”

Danny Eckles, Jr. was a two-year letterman in football at Crockett High School and received honorable mention as a center on the All-District 22-AA team, when Crockett won the district championship. He had resided in Crockett for five years and was a 1961 graduate of Crockett High School. He was employed by Brookshire Brothers Grocery.

Danny participated in junior high football and freshman volleyball. He was on the annual staff and Bulldog Barks staff during his senior year and was a student worker in the principal’s office during the last school year, where he served very capable.

Johnny Frye was a native and lifelong resident of Crockett and a member of the Methodist Church. He was an outstanding high school athlete, earning letters in football and baseball three years and basketball two. In football, he was all-district center as a freshman, honorable mention as a sophomore and all-district fullback as a junior.

He was all-district catcher in baseball in 1961.

Horace Moore, Jr. was a native of Houston County and had lived in Crockett much of his life. He was a member of the Baptist church.

Horace was an outstanding athlete of Crockett High School, graduating in 1961. He lettered in football, basketball and baseball all four year in high school and in track and tennis two years. He was president of the “C” Club and co-captain of the football team. He was all-district, all-area and honorable mention all-state in football and was to have attended Arlington State College on a football scholarship. He received the football sportsmanship award his sophomore year.

Horace was “best all-round boy” his senior year, “ Mr. C.H.S.,” class vice president, member of the annual and Bulldog Barks staffs, runner-up for most handsome and a member of the FFA chapter, as well as an officer of that group, during his senior year. He was class president as a freshman and class favorite as freshman and junior, member of the Spanish Club, king of the Harvest Festival as a freshman, runner-up as most popular as a junior and three-time nominee for most handsome.