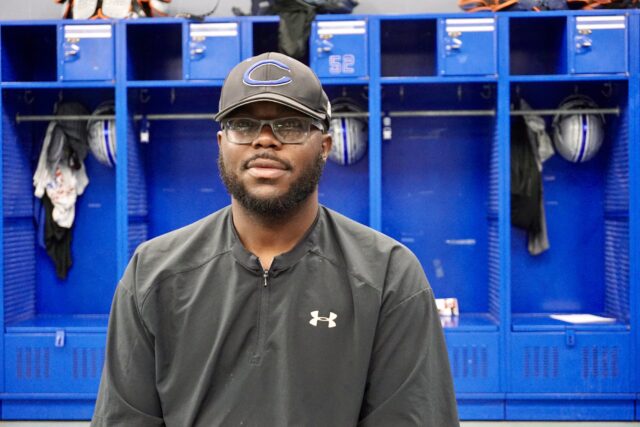 CROCKETT –  Van E. Jordan II is in his first year as Special Teams Coach for Crockett Independent School District (CISD) high school football team. Originally from Orange, Jordan learned from his father, Pastor Van Jordan, Sr. that football – like life – is all about your motivation.

“My father was the person that introduced me to sports. He’s the person who taught me what I teach to the players here. ‘What’s your why? What do you play for and why do you play this game of football?’ I tell them for me, it was my father. He was my first coach. And so you give your all to the game, because you don’t want to let that person down. Because you know that ‘why.’”

Jordan (whose wife is from Crockett) is enjoying life – and sports – in a small town.

“It’s like being home,” Jordan said. “That smell of trees – not looking at highways all day. Being here, being part of this football community, working with Coach Dixon – it’s been great!”

On Wednesday, Oct. 5, Jordan woke up to a phone call and the news his father – and inspiration – had passed away. Only in his 50’s, Jordan Sr. had succumbed to cancer.

Jordan had the support of his family, but it was the support he received from the coaches and this community that really helped him through it.

After hearing the news about his dad, Jordan told Coach Dixon he would be in to work anyway.

“He said, ‘Pals stay together.’ That meant the world to me, because the emphasis that we put into the kids here: standing together. We preach to them to stay together in football and stay together in life.  When Coach Dixon told me that, I said, ‘That’s a great man right there. That’s a man that loves his coaching staff.’ Him and these coaches saying, ‘we stay together’ meant the world to me. I basically broke down and cried because the emphasis behind it wasn’t me – that is the culture we are trying to build here, ‘Stand together.’”

Jordan still grieves his father, but understands that he must now live up to his legacy and his expectations.

“He instilled in me the foundation of life,” Jordan remembered. “He always told me, ‘Either you are existing in this world or you are living in it.’ The last time he came to see a Bulldog football game, we didn’t win and I told him we had a tough game. He answered, ‘Yes, you were just existing in the first half, but you really began living in the second half!”

The support Jordan received during this dark time brought light to himself and the memory of his father. Pastor Reginald Marshall and his wife Dorothy he Intercity Worship Place presented Jordan with a beautiful resolution.

The resolution reads in part, “May the Lord continue to watch over you, and may the warm memories you have of your father sustain you during your hours of sorrow. We know you loved him, but our God loved him best. Your father served his family and friends with the love of the Lord. His life radiated with kindness and now our Father has

called him home to rest.

Jordan is humbled by the outreach and grateful to his new community.

For those of use who know the big hearts in Houston County, it is just another example of how we choose to live – standing together.