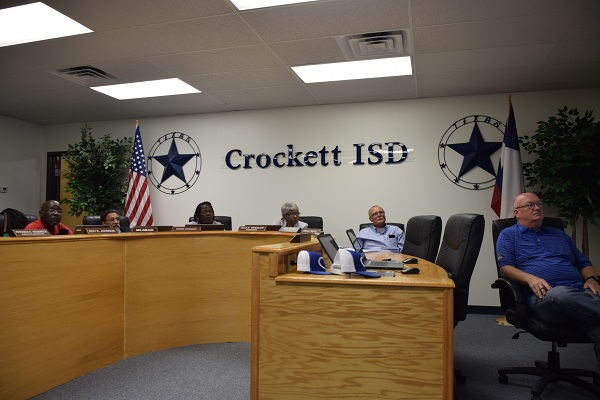 CROCKETT – During a meeting of the Crockett Independent School District (CISD) Board of Trustees meeting held on Monday, June 24, the board was given an update on the district’s accountability and canvassed the results from the recent Tax Ratification Election (TRE) held on Thursday, June 20.

“I’m pretty pleased with how our kiddos are performing from grade level to grade level,” CISD Superintendent Terry Myers.

The superintendent said several grades were performing well while a couple of classes needed improvement.

As he continued, Myers explained accountability ratings could take a dip due to a particular class, a change in standards or a change in teachers.

“As you look at these things, look at them in terms of student performance and not how we will fare in this new accountability system. You have heard me say this and I will say it over and over – the accountability system in this state is designed to make low socio-economic school look bad. You know we are over 90% (low socio-economic students) and I guarantee you when we get these results – I’m talking about around the state – not just in our district, anyone (district) with a D or an F, I can almost guarantee you they will have a low socio-economic status or a high minority population, or both.”

He added over 60% of students in the state of Texas were economically disadvantaged while in CISD the percentage was 90%.

Myers then turned the accountability presentation over to Asst. Superintendent John Emerich.

“As you can see, while the scores are still not where we want them to be, the longer we have these kids, the better these scores are. We know that in elementary, one of the proven factors for the greatest success is the student-teacher ratio,” he said.

Dovetailing into the TRE, Emerich said had it passed, it would have provided the district with approximately $250,000 in extra funding – or the equivalent of five full-time teachers.

“We would have had this year after year, could have hired five more teachers and lowered the class size in the elementary. There was a lot of misinformation that was out there saying this was a one-time thing. It was completely false,” he said.

Following Emerich’s presentation, Myers commented, “The bottom line on our school district, regardless of how the TRE came out, our district is in the best shape, financially, that we have probably ever been in this year because of the influx of money coming into the schools. There will be no reason in the next couple of three years that we will even have to look at taxes or tax rates. I fear that with this TRE not having passed we missed a great opportunity in this community to mitigate future tax increases.”

“I will say this,” the superintendent continued, “The best thing Crockett, Texas has going for it is this school district right here. The very best thing and very best investment that this community could ever have is investing in the children of this community. I don’t care what else is going on in Crockett, it pales in comparison to what is going on in this school district. I’ve seen it in New Mexico and in rural Texas, if you let a school district go away, that community will be about zero in three or four years.”

As the meeting continued, the results of the TRE were canvassed which showed the final vote tallies at 191 against and 165 in favor.

Also of note, the superintendent reported the district’s CEP program “… our student meals program in the district. We have the opportunity to not only give breakfast and lunch, but we are going to do supper now for the kiddos. At the end of the day, those going home will have their little bellies full. WE will actually get reimbursement based on the same amount we would get for a breakfast or a lunch.”

City of Grapeland Proposes Lower Tax Rate
COVID-19 in Area Schools
KENNARD PREPARES FOR FIRST DAY OF SCHOOL
Please follow and like us: