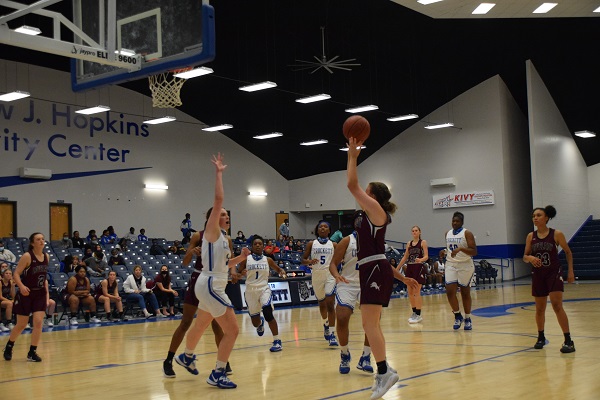 CROCKETT – The Lovelady Lady Lions opened their basketball season on Tuesday night with a game against the Crockett Lady Bulldogs.

Lovelady was coming off of an appearance in the UIL volleyball playoffs while the Lady Bulldogs were just getting their legs under them after COVID-19 forced a two-week lay-off.

As one would expect for the first couple of games of the season, the play on the court was a little ragged at times as both teams were still trying to figure out what would work. In the end however, the Lady Lions simply had too much firepower and walked away with the 58-28 victory.

The game started with the Lady Lions showing off their depth as six players found the scoring column in the opening eight minutes of play. Shyanne Pipkin dropped in four while Kortney Bynum, Haley Davidson, Aaliyah Jones, Macie LaRue and Rajanae Polhamus all had two apiece.

The Lady Bulldogs were cold from the floor as the game got underway. Tocarra Johnson led the way with four points while Quenisha Henderson dropped in a bucket to make the score 14-6 after the first quarter.

Lovelady extended their lead in the second period as they doubled up on Crockett, 12-6. Bynum and LaRue both had four points while Davidson and Pipkin netted two each to take a 26-12 lead into the locker room at halftime.

Crockett’s second quarter points came from La’Kyreah Hamilton with a three, T. Bell with two and Henderson with one.

LaRue paced the Lady Lions when they came out of the halftime break with seven as Lovelady began to pull away. Jones dropped in two while Morgan Womack broke into the scoring column with a bucket.

Crockett missed a chance to get back into the game as they were stymied at the free throw line by four of eleven shooting. Henderson nailed a three-pointer while A. Wooten hit two free throws. Crabtree and Tryon were both one of two from the line as Lovelady took a 37-19 lead into the fourth quarter.

The Lady Lions erupted for 21 points in the final frame to put the game on ice. Pipkin led the way with seven while Shelby Pugh dropped in four. Five other Lovelady players – Bynum, Davidson, Jones, LaRue and Womack – all had two apiece to close out the Lady Lions’ fourth quarter scoring.

Try as they might, the Lady Bulldogs simply didn’t have enough juice to overcome the Lovelady lead. Henderson netted five in the fourth while Bell and Johnson both had two as the Lady Bulldogs fell by a final score of 58-28.

The Lady Lions were paced by Macie LaRue with a game-high 15 points. She was joined in double figures by Shyanne Pipkin with 13 points. Kortney Bynum dropped in eight, Haley Davidson and Aaliyah Jones both had six, Shelby Pugh and Morgan Womack added four apiece and Rajanae Polhamus closed out the Lovelady point production with two.

Quenisha Henderson led Crockett with 11 points, Tocarra Johnson netted six and T. Bell had four. La’Kyreah Hamilton drained a three, A. Wooten had two and Keaton Crabtree along with JaKenya Tryon both had one.