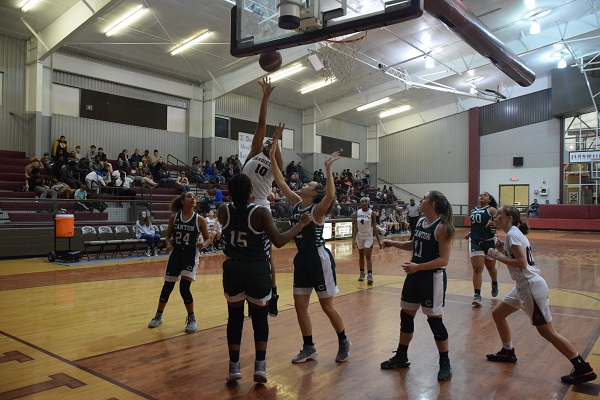 GRAPELAND – There’s nothing like the taste of home cooking and the Grapeland Sandiettes needed a little bit of that after two straight losses.

On Tuesday night, Dec. 3, the Sandiettes returned home after the Thanksgiving holidays for yet another feast as they devoured a different type of bird – the Canton Lady Eagles – by a score of 62-32.

Grapeland raced out to an early lead in the first quarter only to see Canton cut the lead to 10-9 with less than three minutes left in the opening period. From there, however, the Sandiettes went on a 6-0 run to close out the quarter and take a 16-9 lead.

Kenya Woods paced Grapeland in the first eight minutes with eight points. She was joined in the scoring column by Teira Jones with four while Aeriannia Granderson and Jessie Payne both had two.

The Lady Eagles were led by Shameir Quimby with five points as Kori Nicklas and Kayden Prox had two apiece.

The defensive intensity of the Sandiettes was on display in the second quarter as Grapeland held Canton to three points on a basket by Prox and a free throw from Ashley Riffe.

Two plays showcased the defensive prowess of Grapeland during the second quarter. With the score 24-11, Tatiyana Bowie literally plucked the ball from the hands of a Canton player. She flicked the ball to JaMiyah Bowie who – in turn – dished to Woods for an easy two.

A minute later, Jones drew a charge when she held her ground, as Quimby bowled her over in the paint.

Jones also put her offensive stamp on the game in the second period with eight while KeKe Harris drained a three to go along with a pair of free throws. Woods and Tori Woodford both chipped in a bucket apiece to round out the first half scoring with the Sandiettes up big, 33-12.

After the break, the Lady Eagles’ offense began to pick up the tempo as they dropped in 13 points during the third quarter. Quimby knocked down seven while both Prox and Diana Norrell had three apiece.

Jones continued to make her presence felt as she added four to her total while Woodford made it rain from three point land. Three other Sandiettes – T. Bowie, Payne and Woods – all dropped in two during the quarter to help push the Grapeland lead out to 46-25 after three.

The fourth quarter was mainly garbage time, but one sequence in particular showed just how dangerous the Sandiettes can be. With the score 48-30, Grapeland rattled off 10 points in 20 seconds to take a 58-30 lead on the way to an easy 62-32 win.

The Lady Eagles were led in scoring by Shameir Quimby with 12 points while Diana Norrell and Kayden Prox both had seven. Kori Nicklas and Amber Welch each had two while Madison Baugh and Ashley Riffe chipped in one apiece.

Grapeland’s Teira Jones led all scorers with 23 points. Kenya Woods was also in double figures for the Sandiettes with 15, while KeKe Harris dropped in nine. Jessie Payne knocked down six, Tori Woodford had five and both Tatiyana Bowie along with Aeriannia Granderson had two apiece to close out the Grapeland scoring.