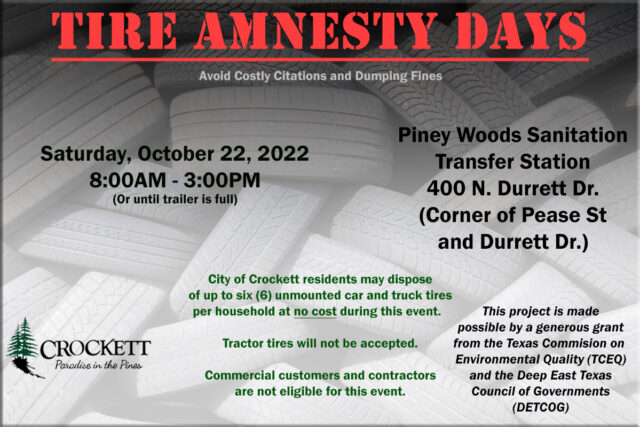 CROCKETT –  The Houston County Water Control Improvement District Number One has asked the City of Crockett to help reduce water use in the city. The city is requesting a voluntary reduction of 10% in water use due to the low water levels reported at Houston County Lake.

The extreme drought this summer and the recent further lack of rain has caused water levels across most of Texas to be much lower than normal.

The city asks citizens to refrain from all non-essential water use such as washing cars and watering lawns until further notice.

This is a voluntary request for now, although the city notes that it could become mandatory if lake levels continue to drop.

The city has also announced an “amnesty” for getting rid of old tires. Residents of Crockett are allowed to bring up to six unmounted car or truck tires per household with no fee and no penalty.

The tires can be brought to Piney Woods Sanitation Transfer Station, 400 North Durrett Dr. On Saturday, Oct. 22 from 8 a.m-3 p.m.

Commercial customers and contractors are not eligible for the amnesty and tractor tires will not be accepted.

The project was made possible by a grant from the Texas Commission on Environmental Equality (TCEQ) and the Deep East Texas Council of Governments. (DETCOG)

Normal Dell Jones: The Lady, the Legend and the End of an Era
Grapeland School Board Swears In Trustees, Reorganizes
Man Arrested for Burglarizing Same Residence - Twice