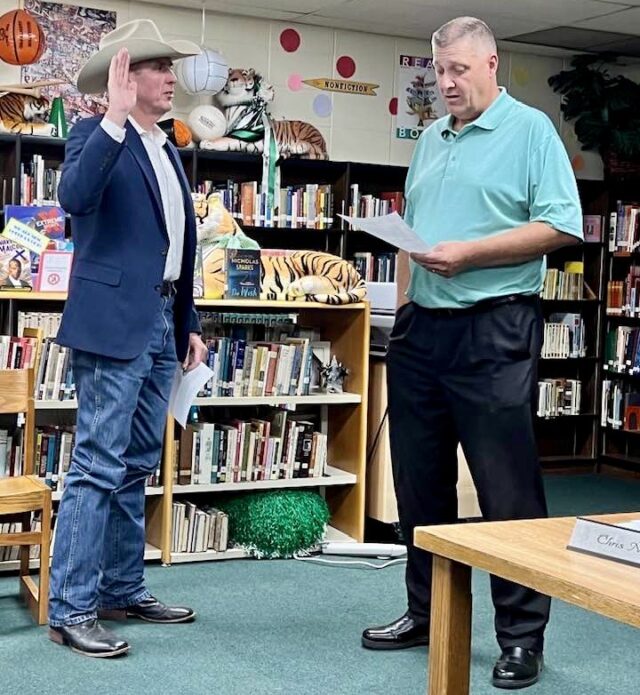 Martin began working for the school district at the end of August, but the school board meeting finally made the post official after the swearing in by LISD Superintendent Michael Woodard. He spent most of the first month working on policies and procedures – and doing all the required work getting the LISD police department officially established.

“We have everything up and running,” Martin said. “The superintendent really got a lot done even before I got here. We now have everything approved through TCOLE (Texas Commission on Law Enforcement). We have our agency number and we are officially a police department. We are excited!”

Martin began working in law enforcement in 2003 with the Houston County Sheriff’s Office in Crockett. After completing the law enforcement program at Angelina College, Martin worked on patrol for a few years before being promoted to work as a narcotics investigator. He then took a job with the Angelina County Sheriff’s Office in Lufkin as an investigator. While there, he received special training to serve on the Sheriff’s Response Team.

Martin has special tactical and sniper training which everyone hopes will never come into play in his new role. In the meantime, Martin said it feels nice to wear a badge and see everyone so happy to see him.

“It’s really rewarding for me,” Martin said, smiling. “In law enforcement, a lot of times you deal with people at their worst. They don’t really want you there. You are there because they are the victim of a crime – or you’re there because they have done something wrong. Here, the teachers are glad you’re here, the kids are glad to see you. This is the most rewarding thing I have ever done.”

For the last month, Martin has been working as more of a security consultant for the district while all the paperwork was processed to create the department. Martin was impressed with the security measures taken at the Latexo schools.

Martin spoke with the Messenger wearing a green uniform and baseball style hat. Asked when he will bring back his signature cowboy hat, Martin laughed.

“I will definitely be wearing it for the school board swearing in!” Martin said.

The new job has been good for Martin and his family – especially now that he can skip the long daily commute to Lufkin. Martin worried he might find the new job monotonous after working with various Sheriff’s departments and training for tactical situations.

“I still keep up with the tactical training,” Martin explained. “I was afraid that I would miss that. But, really, I am just so happy with the atmosphere here. I haven’t missed it at all.”