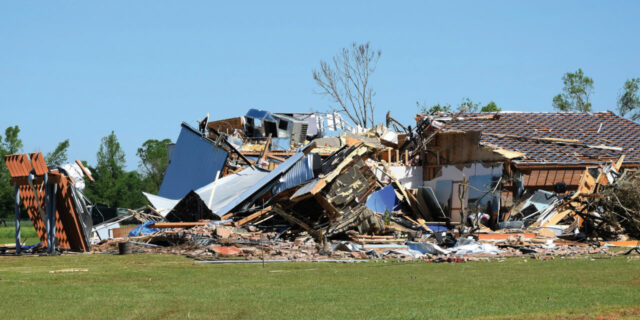 EAST TEXAS – For the second weekend in a row, the fury of Mother Nature was on display. First, there was hail damage suffered by residents of Grapeland over the April 6 weekend.

That paled in comparison to what followed on Saturday, April 13 as the National Weather Service (NWS) confirmed three tornadoes touched down in Houston County.

The confirmed tornadoes were an EF-3 near Weches, an EF-2 near Lovelady and an EF-1 near Ratcliff.

The NWS breaks tornadic activity into five categories on the Enhanced Fujita scale. These are:

• EF 5 – These are also considered violent and have wind speeds in excess of 200 MPH. |

“In addition to numerous straight-line wind damage and hail reports, three tornadoes have been confirmed. These storms were the initial portion of a much broader severe weather event that stretched across the southeastern states through April 13 and continued into the mid-Atlantic on April 14. A damage survey team went to Houston County on April 14 and surveyed damage tracks from three tornadoes. Two of those surveys were done jointly with WFO Shreveport, as the tracks crossed the boundary between the two offices’ areas of responsibility,” a statement from the NWS reported.

It is believed the tornado near Weches (EF-3) touched down at approximately 12:56 pm, with estimated wind speeds of 140 MPH. It followed a pathway approximately 15 miles in length and over 800 yards wide.

According to the NWS, “A tornado touched down in Houston County, northeast of Crockett and tracked for 30 miles across the county line through Cherokee County. The Houston County portion of the path was 14 miles. Most of the damage was snapped pines, indicative of EF-1 damage, but much more severe damage was found in an area just northeast of Weches where a double-wide trailer and its frame were thrown over 150 yards and destroyed. A female occupant within the trailer was killed.”

The tornado near Lovelady (EF-2) touched down at approximately 12:23 pm, with estimated wind speeds of 130 MPH. It followed a pathway roughly 3.85 miles in length and over 100 yards wide.

“The tornado produced intermittent damage along its track taking a metal roof off of a home where it touched down. The most severe damage was on the northeast end of the track where trees were stripped of limbs. In addition, vehicles were tossed and stacked on top of one another. A double-wide trailer home was also destroyed,” the NWS reported. The tornado near Ratcliff/Tadmor (EF-1) touched down at approximately 11:33 am, with estimated wind speeds of 90 MPH. It followed a pathway roughly 0.3 miles in length and over 75 yards wide.

“Tornado damage was found along county road 1175 with trees snapped and uprooted along a path parallel to the road. Near the end of the path, the tornado destroyed a double-wide trailer home and pushed it into a wooded area. Four occupants in the home were injured but, as of April 14, were released from the hospital,” the NWS indicated.

Officials are still trying to determine if there were two tornadoes or just one that plowed through the Caddo Mounds/Alto area.

The one that ripped through the Caddo Mounds area snapped and uprooted thousands of trees along its path, the NWS estimated.

The storm paralleled State Hwy. 21 before getting to Alto, where it severely damaged or destroyed approximately 20 homes.

“Included along the damage path southwest of Alto was the Caddo Mounds State Historic Site building which had its roof torn off, nearly almost all of its exterior walls removed and was left to only a few interior rooms in the building. Several people were outside running to get inside for safety when the building was destroyed, resulting in a fatality and serious injuries,” the NWS stated.

The NWS Shreveport Office reported multiple cars in the parking lot were thrown 150 yards into trees and across Hwy. 21. The tornado then went on to lift and destroy a double wide mobile home, throwing it 50 yards. As the tornado continued along HWY 21 its most significant damage was to a single family home and the St. Thomas Chapel which saw the roofs removed and exterior walls collapsed. Winds were estimated at 150 mph at this point.

“As the tornado neared Alto,” NWS Shreveport stated, “it destroyed three homes along Route 294 and Singletary St, recording high end EF-3 damage as it wiped the lower level of a two story home off of its foundation and left the top story of the home 20 yards away from the foundation. The storm then went on to destroy several homes and mobile homes nearby Alto Elementary and Alto High School. The storm continued on to snap and debark several trees in rural Cherokee County, north of Alto. The storm then continued on to remove the large section of a roof in Sacul and crossed into extreme southwest Rusk County before lifting.”

The other two fatalities occurred in Angelina County when a tree fell on a car, killing two children.

One person who was on the ground – near the center of the devastation – was Alto native and former Messenger reporter Sarah Naron.

According to Naron, “We live about six miles outside of Alto, near the Cherokee/Houston County line. My father-in-law and my mom were at our house Saturday morning, helping my husband and me with some remodeling.”

She said they finished “… right around the time the weather was supposed to be getting bad, and when it didn’t do anything more than just rain, my father-in-law headed back home. My mom and I waited for a little bit longer and then decided to go on to Rusk to pick up some lunch, since the weather still wasn’t too bad.”

“By the time we got to town,” she continued, “the weather had gotten worse. We decided to park at one of the businesses in town, and not long after we pulled into the lot, we heard something fall loudly, not far behind us.”

Naron said she could see debris blowing, heard more loud crashes and felt the vehicle she was in shaking.

“When it was over, the guys that were in the building came out and were pointing out all the damage. One of them came over to the Jeep, and we got to talking. The guy pointed over behind us, and we saw that a power pole had fallen, which was the noise we had heard right after we first pulled in,” she said.

“As horrible as it is to see my hometown like this,” Naron said, “it has also been amazing to watch everybody come together. Sunday morning, the roads were lined with people cutting fallen trees and helping people whose houses suffered damage. There have been so many stations set up to receive donations and cook food for people. To me, that’s one of the best thing about our little town – everyone is so ready and willing to be there for their neighbors in hard times. I hate the circumstances, obviously, but it’s so inspiring to see.”