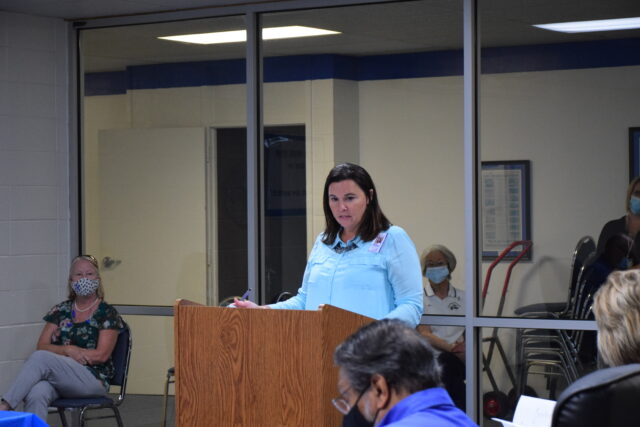 CROCKETT – The Crockett Independent School District Board of Trustees followed a trend on Monday evening, Aug. 25 as they joined several other governmental entities in Houston County as they lowered the tax rate for the coming year.

Crockett ISD Business Director Tamra Scroggins opened the CISD board meeting in a public hearing with a presentation on the district’s budget for the 2020-2021 school year and the tax rate it would take to support said budget.

“I am estimating we will receive $14,274,000 for the operating and revenues,” Scroggins added.

Once Scroggins concluded, CISD Superintendent John Emerich reported, “Since Thursday (Aug. 20) until today, we have already gone up 100 kids in enrollment. We expect that will continue to up and we will be able to adjust the number that is driving the revenue on this.”

Following the budget discussions, the CISD board recognized several members of the staff who were retiring. The first to be recognized was math teacher Suzann Kelly, who had 20 years of service in education. She was followed by Gloria Neel who also had 20 years in education. Last, but certainly not least was Anthony Harris, who served the district for 11 years.

After the retiree presentations, Emerich provided a break-down of the CISD enrollment.

As the meeting continued, the district approved several donations including $3,500 from the Elks Lodge in Crockett; $100 from KIVY; $629 in gift cards from the Houston County First Responders; $600 from the Mariah Lopez Scholarship Fund; and $500 from Woodmen Life.

In other matters brought before the CISD board: