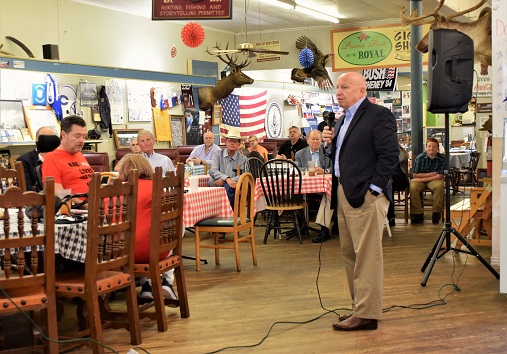 CROCKETT – Labor Day was last Monday and marked the unofficial end of summer. This year, it also marked the beginning of the home stretch for the Nov. 3 general election. With less than 60 days remaining before voters go to the polls to cast their ballots, politicians are hitting the campaign trail to shore up voter support and hopefully sway those who are still undecided.

Given that backdrop, US Congressman Kevin Brady (R-TX8) stopped by the Moosehead Café in Crockett on Thursday, Sept. 10 to discuss several issues affecting voters in Houston County.

“I want to talk about where we are at on COVID-19, which is real encouraging, where we’re at on the economy and how we’re going to help our small businesses survive and I’d like to talk a little about the republican convention,” the congressman began.

While you wouldn’t know it from the national media, Brady said, there is quite a bit of positive news related to the Coronavirus.

“It is a tough disease as you know and states like Texas that led the re-opening saw a flare up of cases. However, in Texas we have seen remarkable progress. Our infection rates have dropped by three-fourths. We are almost at the five percent (positivity) goal. Hospitalizations are down by two-thirds. We have really worked hard as a state to drive these numbers down. It has made a big difference – not that we can take our foot off the pedal. Counties like Houston County, you guys have done a terrific job,” Brady said.

Even though the numbers appeared to be declining, Brady cautioned his constituents to continue to practice social distancing, to wear a mask, to wash their hands and to be smart when out in public.

He added, “The very first bill we passed on COVID-19 was to spend money on accelerating vaccines. Right now, Dr. (Anthony) Fauci told states across the country to be ready to begin deploying a vaccine as early as November. We have gone from zero to hopefully deploying it in November or December. We have to make sure it is safe. The FDA is doing everything really well there. The fastest a vaccine has ever been developed in American history is four years and there is now a good chance there will be one developed in nine months.”

The next topic addressed by Brady concerned the economy.

The congressman said he was one of the lead negotiators on the CARES Act but felt a second round of PPP (Paycheck Protection Program) was need for small and medium-sized businesses to help keep workers on the job as the economy recovers.

“We need help for people who are unemployed, but not so much help that the government pays them more to stay home than it does to go back to work. Businesses all across my district are begging works to come back to work, but the workers will tell you they are making more money on unemployment than they are when they’re working,” he said.

Moving to his third talking point, Brady said he was very proud of the Republican National Convention.

“I think there was a big contrast between the two conventions. The message coming out of the democratic convention was America has been rotten since its founding. It has been rotten for 244 years. That isn’t this America. We are nothing like that. We are a remarkable country that cares for one another and provides amazing opportunities. We are a work in progress. There is no question about that. There are plenty of things we have to do to get better including addressing police reform and justice issues. That is absolutely correct. We can do that that together and heal but we are not the rotten country portrayed by the democrats at their convention,” he said.

Brady said what he saw from the RNC on night one was that America is a land of promise. Night two was a showcase of American heroes and the final night showed what Brady termed as America was a land of greatness.

Following his presentation, Brady took approximately 15 minutes of questions from the audience before he hit the campaign trail, once again, on his way to Trinity.

Farmers, Ranchers, Landowners Workshop Set for May 22-23
Grapeland ISD Discusses Childcare Center
Once in a Decade