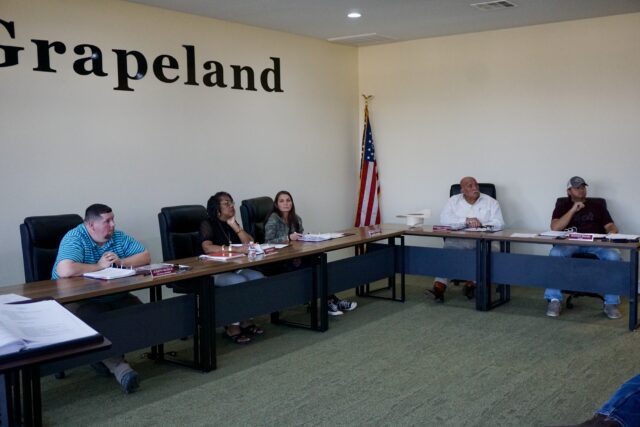 GRAPELAND – The Grapeland City Council met twice this week to go over plans for upcoming events and to vote for a reduction in taxes.

Several citizens were on hand to ask the council for help with various issues with their water bills. The council decided to discuss the cases individually in executive session and report back to the citizens later.

Grapeland Independent School District (GISD) Superintendent Don Jackson was on hand to discuss GISD annexing First Street for security reasons during normal school hours. Jackson told the council this would increase the security zone around the school. The city will keep the street, but it will be closed during the hours of 7 a.m.-4:15p.m. during school days. The council voted unanimously to approve this.

Grapeland resident Diane Haws requested the city support her during her Walk for Blind Awareness. (See accompanying story in the Thursday edition.) The city again offered the use of the city park, police assistance and the opening of the bathrooms for the use of the walkers.

The city council also approved purchasing new Christmas decorations to replace some of the aged ones. The “Trunk or Treat” Halloween festivities were set. The event will be held at the city park  on Saturday, Oct. 29 at 6:30 p.m.

At a second city council meeting held Friday, Sept. 16, the council unanimously voted to lower the tax rate to $0.4481. This is down from the previous tax rate of $0.472. The vote was unanimous. A public hearing will be held Friday, Sept. 23 at noon for citizens to make comments about the tax decrease.