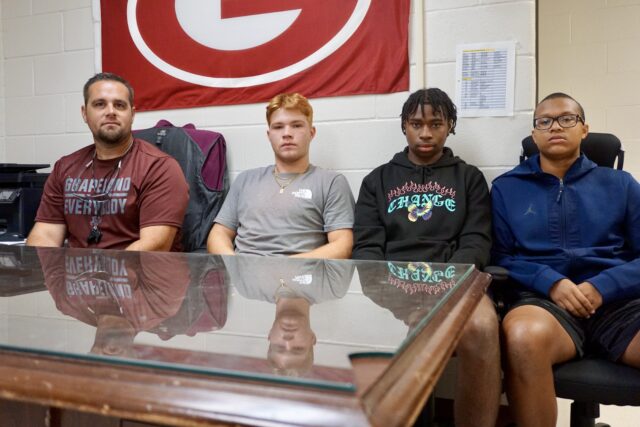 Sandies Head Coach and Grapeland Independent School District (GISD) Athletic Director Jordan Wood sat down with some of Thursday’s game-makers to speak with the Messenger about the victory. See the full video online at the end of this article. We would like to thank our sponsor, Grapeland Chamber of Commerce and the upcoming Peanut Festival.

How is the season going so far?

“We’re doing a good job as far as the team staying together, working hard and not getting down. We want to change the culture and the way we compete; win or lose. In the first game of the season, a whole lot of things didn’t go our way, but we didn’t get down and we didn’t quit. We deserved to win that game and we wish it had gone another way.”

What is it about Grapeland sports “culture” that you are working to change?

“We’ve done a great job every single week with the athletes. When things go bad they bounce back to the next play – and follow it with a good play. That’s something that we really worked hard on changing and they are doing a better job at that. Just like in the game against Groveton. They played well – we scored and they responded. We just kept playing.”

It seems like the passing game is starting to come together?

“The biggest difference between the game with Lovelady and Groveton is with Groveton, we decided to take the space they gave us and throw the ball there. We took the shots we could, and connected more often than not. We tailored our game plan to take grass and space underneath. We had a high percentage of completions.”

A lack of available officials caused the Friday night game to be moved to Thursday How did that affect you and the team?

“It made for a short week which can be difficult – especially when you are talking about high school athletes. But our kids responded well and did a great job to prepare for that game.”

“We work well with Coach Wood, although when he first came here he made us run the bleachers! It felt good to win that game. We came out Monday and Tuesday for practice and worked our butts off and showed it on Thursday. I want to tackle and block better.”

“I have been doing well, working hard in practice – trying to get a chemistry with the guys. I am trying to make sure I get the play in my head before we run it. I have been thinking a lot about what I will do after high school but I am still undecided.”

“My favorite subject is athletics. I hope to become stronger, faster, tougher.”