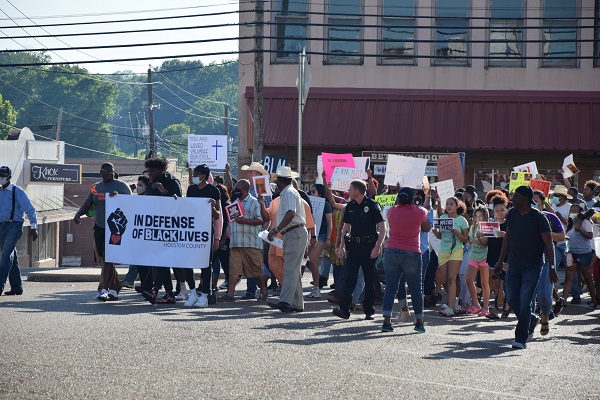 CROCKETT – On May 25, George Floyd, a 46-year-old black man, was murdered in Minneapolis, Minnesota, during an arrest for allegedly using a counterfeit bill. A white police officer named Derek Chauvin knelt on Floyd’s neck for eight minutes and 46 seconds until he was dead.

During the nearly nine minutes Chauvin had his knee on the neck of Floyd, video of the homicide showed Floyd pleading for his life and repeatedly saying, “I can’t breathe.”

Floyd’s murder shocked the world. It also created a spark which started a worldwide firestorm against racial injustice and police brutality.

Protests have erupted from coast-to-coast across the US and on Wednesday, June 10, the demonstrations came to Houston County.

Between 250 and 300 people showed up in the park across from Crockett City Hall in a show of solidarity as they came together as one to protest racial injustice in the wake of the George Floyd homicide. Some were old. Some were young. Some were Black. Some were Hispanic. Some were White.

As the rally/demonstration began, Pastor Arvin Medlock addressed the crowd and implored those in attendance to be respectful of property, people and to peaceful during the demonstration. He then asked Pastor A.L. Wallace of Good Shepherd Fellowship Church to say a word of prayer.

“We don’t know what lies ahead of us,” Medlock said. “We don’t know if there will be some agitators. We are not going to worry about that. We are not going to visually engage and we are not going to verbally engage. If someone approaches you to attack, we ask you to lock arms with the people around you and begin to shout, ‘Know Justice, Know Peace. No Justice, No Peace.’ That way law enforcement and the people organizing this can get there as soon as possible to de-escalate the situation. If this turns bad, then what we are out here to do is all in vain. We, as the demonstrators, those who are here to walk, need to make sure we demonstrate peacefully. We want changes to the system, but we must do that the right way.”

Next, Crockett resident Darren Hubbard spoke to those in attendance about chants they demonstrators would recite while marching. The chants included “Black Lives Matter,” “Get up, stand up. Stand up for your rights,” and “We want justice. We want peace.”

The crowd then began to line up behind a banner which stated “In Defense of Black Lives – Houston County,” and began to march up 4th Street towards the Houston County Courthouse. The demonstrators turned left on Goliad Ave. while chanting, “Get up, stand up. Stand up for your rights,” before making another left on 5th Street and marching back towards City Hall.

Following those who spoke, one-by-one, the protestors took a knee and remained that way for eight minutes and 46 seconds – the amount of time ex-Minneapolis Police Officer Derek Chauvin knelt on the neck of George Floyd, until he died.