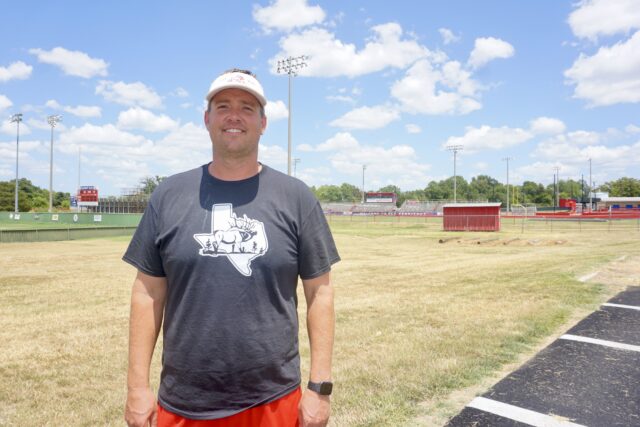 ELKHART –   Two years ago Coach Luke Goode beat out over 100 applicants to become Elkhart ISD’s athletic director and head football coach. His first year included all of the interruptions due to COVID-19, and last year part of the season was interrupted due to failing bleachers on the sports field.

Goode survived and thrived through it all, proud of the program he is still building. He was glad the bleachers have all now been repaired after they were determined to be unusable last year. This caused several games and Elkhart High School graduation to moved to alternate locations.

“Last year we had a schedule where we would have a lot of home games,” Goode said. “It was a big deal when it happened. Playing 10 road games last year was not ideal.”

After finishing school at Stephen F. Austin, Goode worked in Lufkin and in his home town of Loan Oak before coming to Elkhart. He enjoys the Elkhart community, and the support he has received from locals, as well as from school administrators and the Elkhart ISD school board.

“That’s a big deal, that everyone is on the same page – supporting us – and we all want the same outcome,” Goode said.

Goode is optimistic for the football squad this year, saying finally they can concentrate on the coaches and the kids with no other distractions.

“The past three days of practice – the energy, the competition – all those things have been so much better,” Goode continued. “It’s because now we have been around each other, we know each other’s thoughts. So we are excited about the new year.”

“Ultimately we have to stay healthy, which will help us in the long run,” Goode explained. “The guys we have now can perform; they can compete. We want to do better than we did last year and I think we can, if we just stick to it and play together.”

Goode tells his players they will have good days and bad in their academic careers as well as in life.  He compares it to the ebb and flow of a family relationship.

Goode said, “Even when you are a family, there are going to be highs and lows when you are trying to accomplish something great. We tell our guys, ‘If you look out here, there are not 100 guys, there are not 150 guys. It’s just you guys, and you’re here because it’s not easy. Trying to be successful or trying to win – none of that is easy. When you have difficulties, what is your mindset? Are you ready for that?’”

“If your mindset is right, you are going to be a winner. When you leave here – ultimately – being a competitor, being a winner, will help get you through life. That’s what sports is about. The things you learn from it, not just the winning or losing.”