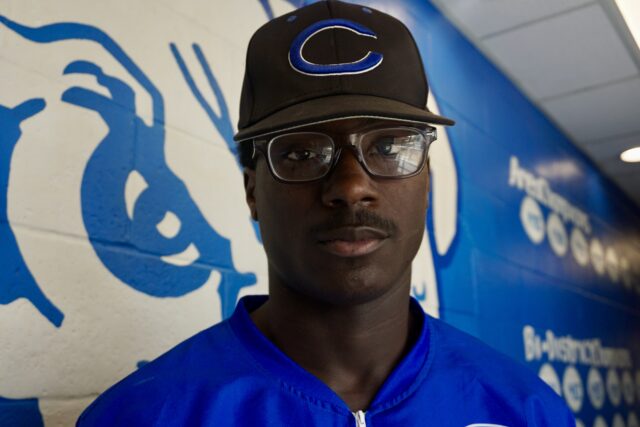 CROCKETT –  Crockett Bulldogs’ quarterback Jadyn Collins is about to begin his senior year of high school.

For those looking for the numbers – Collins finished 2021 with: 682 passing yards, 481 rushing yards for a total of 1,182 yards. He was first in the district for passing and second for rushing.

Which brings us to the 2022-2023 season set to begin Thursday, Aug. 11 with a scrimmage game against Elysian Fields and the first district game about a month later.

The Crockett locker room is home to a number of new faces this year – both players and coaches. One of the links to previous years the Bulldogs are counting on is Jadyn Collins in the quarterback position.

Coach Dixon brings Collins into the interview almost like a caring uncle, as much as a coach. You can see there is a special level of trust and respect between the two. Collins is nervous – which is understandable – however, he soon opens up when the ice is broken and football and future are the topics.

Collins has played as a starting quarterback all four years of his high school career. Collins said although he played well last season, he believes he can do better.

“I feel like there’s a lot of improvement to be done,” Collins said. “Over the summer I worked on my footwork and my passing.”

Collins said both have improved this year and acknowledges that although sometimes the coaches can be strict, this helps keep him in line and in top form.

As for plans after high school, Collins has given that a lot of thought. His goal is to continue playing and attend an HBCU. An HBCU is any historically black college or university that was established prior to 1964 – whose principal mission is the education of African-Americans.

On the personal side, Collins’ favorite quarterback of all time is Michael Vick. His favorite subjects right now are biology and English. When it’s time to wind down, he likes to just hang out with his friends.

As the starting QB for the local team, the pressure can be high for young men like Collins. Winning or – heaven forbid – losing, is seen by the whole community, along with friends, classmates and family. For Collins it is not always easy to handle the stress of the position and the high expectations.

“It’s difficult sometimes. But it’s still exciting, because I am a pretty competitive person – in everything. Football, games, running – anything. I’m just a competitor,” Collins said.

After college, Collins would like to become a coach in his own right.

“I feel like I can help the young people, the people coming up to get somewhere like I did,” Collins added. “These coaches now really help us; they care about what we are doing. They really buy into what we are doing and that helps the confidence of everybody else.”

When the final whistle blows and the fans go home – Collins thinks about the support from his family. He wants to win for them too.

“My family is very proud of me,” Collins explained. “I feel like I just have to make it for them. Not for myself, but for them.”

No Honor Amongst Thieves
Mission Tejas State Park plans improvements
Schools to Celebrate Counselors
Please follow and like us: