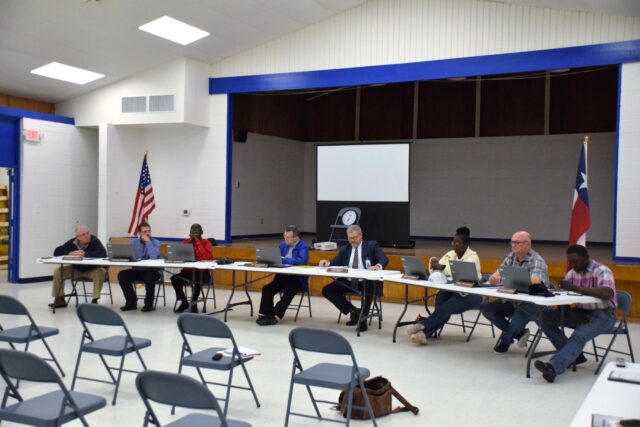 CROCKETT – It was a case of good news, bad news during the Crockett Independent School District Board of Trustees meeting held on Monday, April 25.

“As you know, we started this process back in the Fall. We had a site-based committee meeting where we discussed the possibility of Crockett ISD becoming a District of Innovation. We brought it back to the (school) board and the board voted to proceed with the process,” the superintendent said.

Emerich further said several additional meetings on the matter had been held, and recently, he indicated the plan had been posted on the CISD website.

“We also took a vote of all the site-based (committee) members, almost all of the members voted and those that did all voted to proceed with the District of Innovation plan. As is required we are now doing a public hearing to see if there are any other public comments anyone would like to make,” he said.

The superintendent went on to say while many school districts can receive waivers for one thing or another, the District of Innovation is a type of blanket waiver which is valid for five years on items included in the plan.

According to the Texas Association of School Boards, “The District of Innovation concept, passed in 2015, gives traditional independent school districts most of the flexibility available to Texas’ open-enrollment charter schools.”

Potential benefits of becoming a District of Innovation include:

“The biggest reason we are doing this,” Emerich added, “is to have some leeway with our school calendar, like many other districts. I believe there are 1,026 districts in the state of Texas and now, over 900 are Districts of Innovation. I would say probably the main reason they do that is to have extra leeway for the school calendar. One of the things we put in there is giving us some leeway with teacher certification. It allows us to have a little leeway with the state.”

He elaborated that this would allow the district to employ someone who may not be certified in a vocational field but was well-qualified to teach a vocational class.

Once the public hearing was closed, the board moved on to other agenda topics. After taking care of several of the items, the board returned to the District of Innovation matter.

A motion was made, seconded and unanimously approved to adopt the Local Innovation Plan as required by Texas Education Code 12A, in order to obtain designation as a District of Innovation.

The state and federal governments have come calling and they want money from CISD related to the construction of the Andrew J Hopkins Activity Center.

Emerich explained, “We – Mrs. (Business Manager Tamra) Scroggins and I have been fighting with the Texas Department of Emergency Management (TDEM) and the Federal Emergency Management Agency (FEMA) for over a year now. Basically, what happened was when the dome was built, after the project was completed – because FEMA money was used – there was supposed to be a review of the project. According to a review of the records, we feel it was completed. Apparently though, the individuals at TDEM who were in charge of the project never closed out the project, even though they completed their review.”

“So,” Emerich continued, “fast forward eight or so years and someone at FEMA was going through some books and realized the project was not closed out. The firm that did the review at that time is no longer in business so they have started the process all over with a whole new firm. As is typical with a lot of federal agencies, I feel like they were trying to justify their existence and of course they did find some things they felt were wrong with the project. Keep in mind this is almost 10 years since the project was completed. Completed, not when it was started.”

The superintendent went on to say the first review showed the project was complete and FEMA did not give CISD all the money they had agreed to until the review was finalized.

“They withheld about $353,000. They withheld that until the review was done. The review was completed, they felt everything was good and they paid the district its money. Fast forward to later when this new company comes in and reviews things. First, they sent us a judgment that said we owed $30 or 40,000. Then they came back and said it was a different amount and it went up. The latest (number) we have gotten is that it is now up to $137,000 the district owes to TDEM because of an error that happened before the project was even started as to how some of the stuff was procured,” Emerich said.

The superintendent went on to say he and Scroggins had been fighting this the whole way, adding US Rep. Kevin Brady and State Rep. Trent Ashby are also now involved with this matter. Emerich also went on to say he had spoken directly with TDEM Chief Nim Kidd about the issue.

“Based on all that,” he said, “the amount has come down to where we don’t owe that much. Their final judgement is we owe $84,876.57, based on something that happened before 2008, when the project was being bid. I have probably exhausted every avenue I can to get the district out of this charge but that is their final verdict. It will be due in a couple of weeks.”

Several board members voiced their displeasure on the matter and requested Emerich to get an assurance of project completion payment before submitting the funds to TDEM.

Part two of the CISD Board meeting article will cover student recognition, the district’s CTE survey and several other matters discussed during the Monday night session.