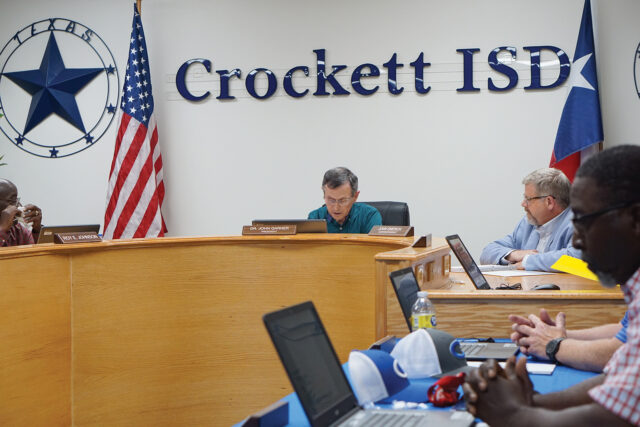 CROCKETT – Finance and nominations for the 2022 Ring of Honor were the main points of discussion on Tuesday, June 21 at the Crockett ISD Board of Trustees regular meeting.

After the call to order, pledge of allegiance and a prayer by board member Stephen Tuggle, the Board heard public comments focused on concerns about Crockett ISD investments given the volatile economy.

As the business portion of meeting began, the Board approved the consent agenda for the night and heard a report from CISD Superintendent John Emerich. He explained the district has received fuel bids but cautioned there could be fluctuations in the gas prices the district pays.

“That’s how it is every year; that’s how those bids work. Obviously, if we were to lock in a price and the price goes up another $5 a gallon, there’s no way someone could afford to give us the gas at a price like that,” the superintendent said.

He did point out that for now, however, the quoted numbers for gas prices were better than the price normally paid at the pump.

Emerich also explained he is requesting additional money to improve the safety of the doors in CISD, which started installing electronic entry doors the staff can open with electronic keys.

He added the additional money would be used to improve the electronic door systems at Crockett High School.

The next topic he addressed pertained to the coming school year’s student code of conduct and asked board members for recommendations.

Board Secretary Karen Norman suggested the district do a better job of communicating the new rules to parents and students, especially regarding any changes to the dress code. Emerich promised to make sure any changes would be posted – as soon as they were approved – on the CISD website and social media so parents would have the information in a timely manner in order to know what clothing to buy for the upcoming school year.

Capehart presented a resolution to the board regarding the sale of “struck off” properties. These are properties that were seized after a judgement and put up for sale. If a property does not sell, it is taken off the tax rolls.

“When a property is struck off,” Capehart explained, “two things happen. Number one, it’s not generating tax revenue for the entities, and number two, the property is not being used for anything.”

The resolution would allow Linebarger to put these properties up for auction. Depending on the jurisdiction, however, the plan would also need approval from either the City of Crockett or Houston County. The resolution was approved unanimously by the Board.

Dr. Gardner commented it’s a not easy to become an approved candidate.

“We do have a set of guidelines that must be followed. It requires a nomination and at least two letters of recommendation. This year we have the most completed applications that we have had in some time,” he said.

The board agreed to vote on four of those candidates and to let Executive Secretary Rhonda Kendrick tally the votes while they were in Executive Session.

Once the members returned to the boardroom, the top four vote-getters were chosen for induction into the Ring of Honor. The nominees will not be made public until they have all been notified, sometime around the first of July.