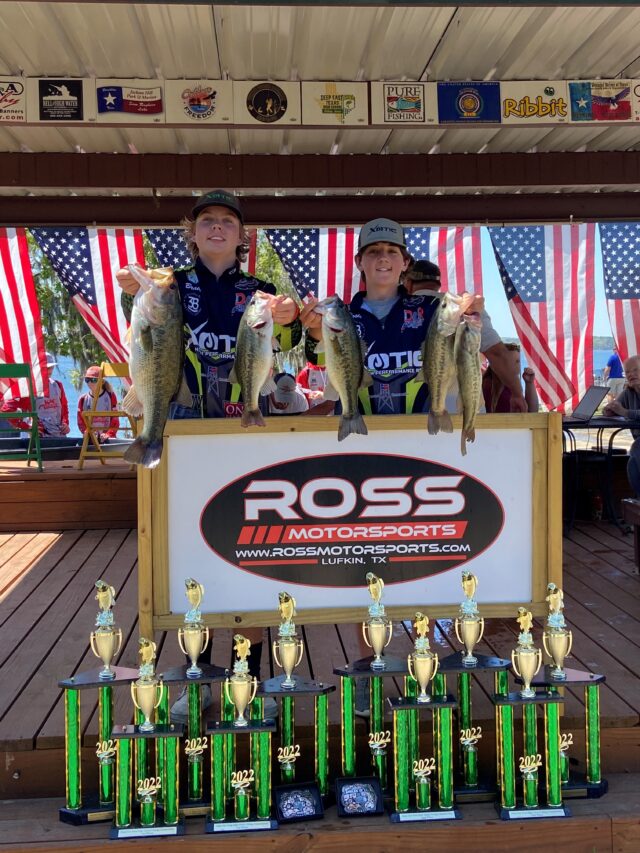 HOUSTON COUNTY – There is a relatively new sport cropping up on the high school scene. It’s fishing (or angling) and it’s starting to catch on.

As it turns out, two of the best young anglers are from right here in Houston County. Boots Burleson, age 14, is the son of John Michael and Haley Burleson while 15-year-old Brady Mikes is the son of Ryan and Jaimee Mikes and the fishing duo is starting to get some well-deserved recognition on the fishing circuit.

Boots is home schooled while Brady will be entering his sophomore year at Lovelady High School.

Boots and Brady started fishing competitively in January of 2020 as a team in the Youth Fishing League (YFL). They did well together with several first-place finishes and Brady ended the season by winning the Angler of the Year award.

From there, the young men joined the Deep East Texas High School Fishing League during the 2020-2021 season. Considered as Junior Anglers, they competed against high school students and ended up in the top 30% by the end of the season.

That same year, the Boots and Brady duo competed in the Jr. High Bassmaster State Championship Tournament, winning first place at the event held on Lake Belton. The win qualified them for the National Jr. High Bassmaster Tournament in Huntingdon, Tenn. on the Carroll County Recreational Lake.

They placed 38th in the nation but the two Houston County anglers wanted to show they were better than that and they started off the 2021-2022 season with a first-place win in the high school division.

Out of seven tournaments with an average of 120 teams, the two young men placed in five of the competitions, putting them in third-place overall for the year and qualifying them for the Bassmaster High School National Championship.

They will be traveling to Lake Hartwell in Oconee County, South Carolina. Out of over 13,000 anglers, Boots and Brady will have the opportunity to tackle Lake Hartwell and compete for the National Championship.

From all of us at the Messenger Sports, best of luck on the lake!!

Elkhart Elementary School Has Watch D.O.G.S. on Campus!
Deliver What’s Paid For Or Let Us Out
Postseason Accolades Continue for Grapeland Basketball