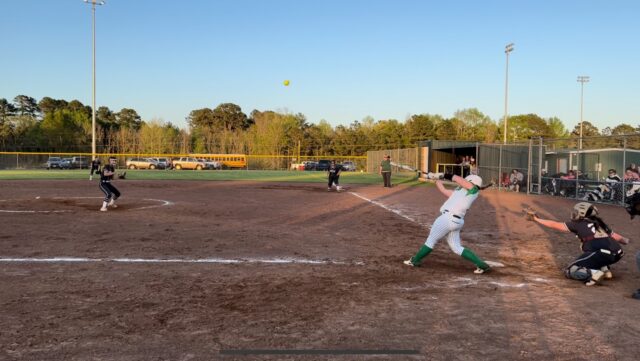 LATEXO – Here’s a new one for ya. The Latexo Lady Tigers are the District 25-2A District Champions following back-to- back wins on Friday and Monday evenings.

The Lady Tigers defeated the Grapeland Sandiettes on Friday by a score of 13-1 and then turned around on Monday and hammered the Big Sandy Ladycats 10-0 to remain undefeated in district play with one game remaining in league competition.

On Friday, the Lady Tigers fell behind early as the Sandiettes scored first to take a 1-0 lead against Latexo’s Lauren Woodard. After that, it was all Latexo.

The Lady Tigers batted around in the bottom of the first to seize a 5-1 lead. Woodard worked a 1-2-3 second inning and then the Latexo squad batted around once again in the second to push their lead out to 10-1.

The Sandiettes managed to put a couple of runners on base in the third, but Woodard worked her way out of trouble to keep the lead at nine.

It didn’t stay that way long. Natalie Nicol led off the bottom of the frame with a single past short. She stole second and third and then trotted home when Baylee Omelina blasted a Jaycee Graham pitch over the centerfield fence to make the score 12-1.

The Lady Tigers would tack on another run in the bottom of the fourth to make it 13-1 and when Woodard retired the side in the top of the fifth, the game was called due to the 10-run rule.

Following the win on Friday, Latexo was back at it on Monday as they welcomed the Big Sandy Ladycats to Lady Tiger Stadium.

Latexo sent Taylor Dise to the circle and Dise worked an easy 1-2-3 inning, throwing only 10 pitches and striking out two of the three batters she faced.

When the Lady Tigers came in from the field, the home team plated two on an RBI double from Katy Allen and a sacrifice fly from Omelina.

Dise had another three up, three down inning in the second, while Big Sandy’s Kiley Dobbs also held Latexo at bay.

In the third, Dise finally yielded a base runner when she gave up a one-out walk. She stranded the Ladycat baserunner at first however, as she came back to fan the next two batters she faced to end the top of the third.

Charlee Biano led off the bottom half of the frame for Latexo and on a 1-0 pitch, she showcased her power as she sent a moon shot over the fence in center field to make the score 3-0. The Lady Tigers would add two more runs to their total as Nicol executed a sacrifice bunt to drive in Allen from third, while Mally Moore drove in Katy Goolsby to make the score 5-0.

In the fourth, Dise ran into a little trouble as she gave up back-to-back singles to open the inning. The next batter she faced grounded out to first, but moved the runners to second and third. Just when it seemed the Ladycats might get back in the game, Dise slammed the door shut. She struck out the next batter after falling behind in the count, 3-1, and then forced Dobbs to ground into a 5-3 force at first to end the Big Sandy threat.

Latexo pushed its lead to 8-0 in the bottom of the frame on an Allen RBI double, a Nicol RBI single and an Omelina sac fly.

Allen came on in relief of Dise in the top of the fifth and struck out the first batter she faced. After giving up a single, Allen fanned the next two batters she faced to bring her teammates in from the field.

When the Lady Tigers came up to bat in the bottom half of the inning, they ended the game. Rowdy Stokes led off with a walk and came around to score on a Goolsby double. With Marissa Allison at the plate, Stokes swiped third. Allison fanned and Biano popped up for the second out. Allen, however, came through with her fourth double of the game to drive in Stokes, which made the score 10-0 and ended the game due to the 10-run mercy rule.