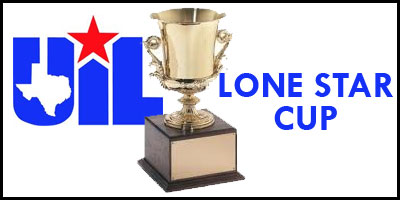 AUSTIN – It’s a case of good news and bad news surrounding the 2020 University Interscholastic League (UIL) Lone Star Cup. The good news is Grapeland was making a strong showing once again. The bad news is the Lone Star Cup ain’t happening this year.

Due to yet another COVID-19 related matter, the UIL issued a statement about the Lone Star Cup last week.

“The UIL has released standings for the Lone Star Cup through March 13, 2020. Due to the cancellation of UIL spring events, the Lone Star Cup will not be awarded for the 2019-20 school year,” the UIL indicated.

In the 2017-2018 school year, the Sandies and Sandiettes finished alone in third place. Last year, Grapeland finished sixth in Class 2A.

This year, the Sandies and Sandiettes were making a strong push towards the Lone Star Cup Championship until all UIL sanctioned contests were suspended on March 13 and later cancelled because of the COVID-19 pandemic.

At that time, Grapeland was tied with Sundown in fifth place with 38 points. Leading the pack in Class 2A was Gruver with 48 points.

As a result of the cancellation, many activities that earn points toward the UIL Lone Star Cup were not completed. These events included: Boys Basketball; Robotics FIRST; Soccer; Academics; One-Act Play; Golf; Tennis; Track & Field; Softball; and Baseball.

This marks the first year the UIL Lone Star Cup has not been awarded since the program began during the 1997-98 school year.