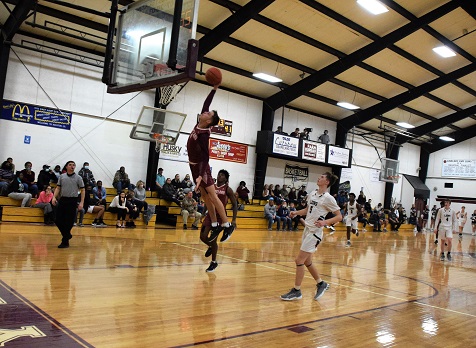 GRAPELAND – The Grapeland Sandies continued their march towards another district championship on Tuesday as they hit the road for a District 20-2A contest with the Lovelady Lions.

The Sandies have finished first or tied for first for 12 consecutive years now and it doesn’t appear they will be stopped from a baker’s dozen of titles after Grapeland walloped the Lions by a final score of 82-50.

The game opened slowly but after the first two minutes had passed, the Sandies began to play pressure defense which led to a 10-0 run and forced the Lions to call a time out at the 3:45 mark of the first quarter.

The TO helped cool off the Grapeland squad but a deep three by Riley Murchison propelled the Sandies to a 19-12 lead after the first eight minutes of play.

Murchison paced Grapeland with seven points in the opening frame. Keizion Ashford, Cadarian Wiley and Omarian Wiley all had four apiece to round out the first period scoring.

The Lions’ first quarter points came from Caleb Gilchrist with five, Shamar Terry with four, Slade Murray with two and Shaun Easterling with one.

As the second quarter began, Grapeland’s BJ Lamb had a leaping shot block and followed that up with back-to-back three pointers. On the ensuing Lovelady possession, Michael Dancer stole the ball cleanly and threw a dime to Lamb. Lamb dropped the ball off to a trailing O. Wiley who finished the play with a lay-up as the Sandies doubled up on the Lions, 34-17, on their way to a 44-23 halftime lead.

Lamb and C. Wiley both had seven in the second while O. Wiley had four. Cole Goolsby drained a shot from three-point land while Dancer and Murchison added two apiece to close out the first half scoring for Grapeland.

The Sandies defense began to frustrate the Lions in the second period and held them to only 11 points. Keivon Skinner got going with six in the period while Murray nailed a three and Terry had a basket to close out the Lovelady first half point production.

After the break, Grapeland began to pull away from their hosts. Johnny Lamb came off the bench to drain a pair of threes. Ashford and Murchison also dropped in six apiece while BJ Lamb connected from behind the arc to push the Grapeland lead to 65-37 after three.

Murray, Terry and Cole Harris all had four in the third while Skinner added a pair of free throws for the Lions.

With eight minutes left to play and a 28-point lead, the Sandies throttled back. BJ Lamb paced Grapeland with five in the final period of play while Murchison added four. The remaining eight fourth quarter points were split equally between Ashford, J. Lamb, O. Wiley and Peyton Prater as the Sandies picked up the 82-50 road win.

On the game, the Lions by Slade Murray and Shamar Terry with 14 points apiece. Caleb Gilchrist netted nine, Keivon Skinner had eight, Cole Harris added four and Shaun Easterling chipped in one to close out the Lovelady point production.

For the Sandies, everyone on the roster scored with five players putting up double figures. Riley Murchison led the way with 19 points, five rebounds, three assists and a steal. BJ Lamb hit four three-pointers as part of his 15 points on the game. Lamb also had three rebounds, seven assists and two steals.

Keizion Ashford was also in double figures with 12 points to go along with one rebound, six assists and three steals. Cadarian Wiley had a double-double as he dropped in 11 points from down low and pulled down 11 boards. He also had an assist and four steals.

Omarian Wiley just missed a double-double with 10 points and nine rebounds. He also had five assists to go along with four steals.

The other scorers for Grapeland were: Johnny Lamb with eight; Cole Goolsby with three; Michael Dancer with two; and Peyton Prater, also with two.

Sandiettes Take Down Lady Tigers, 3-1
Week One: First and 10
Running the Rock