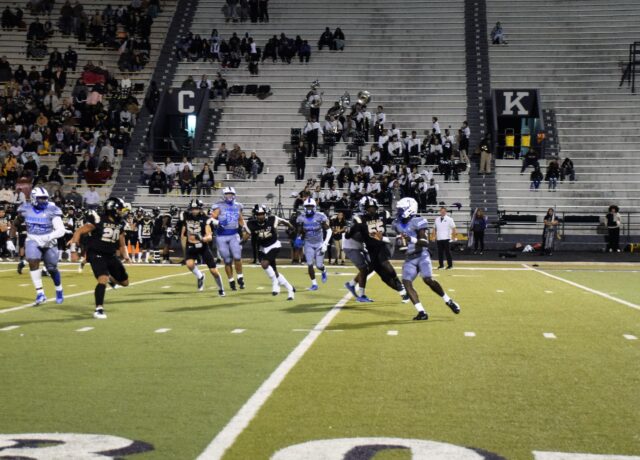 LUFKIN – The 2021 UIL Football Playoffs began on Thursday, Nov. 11 across the state of Texas with the Bi-District Round. The Crockett Bulldogs entered the postseason as the #3 seed from District 9-3A DI and traveled to Lufkin to take on the Woodville Eagles, the #2 seed from District 10-3A DI.

Playing at Abe Martin Stadium on John Outlaw Field was a homecoming of sorts for Crockett AD/Head Coach Alton Dixon given he had played his high school ball at the stadium under the tutelage of Coach Outlaw.

It would have been a great story if Coach Dixon had been able to return home and take down a higher seeded opponent. It was not meant to be, however, as the Bulldogs’ offense simply couldn’t get going as Crockett fell to Woodville by a final score of 41-6.

The Bulldogs won the toss and deferred to the second half. A nice return gave the Eagles good field position at their own 49 and the Woodville squad didn’t waste the opportunity.

Kentreveyoin Prejean opened the drive for the Eagles with a short gain. Woodville QB Jack Fowler followed with a 10-yard completion to Ralon Williams, while Prejean bulled his way inside the Crockett red zone with a 20-yard pick up.

A holding call pushed the ball back to the 24 but Fowler was able to move the Eagles inside the 10 with a pair of completions to Williams and Jaylin Kibble. An offsides call on Crockett moved the ball down to the three and Prejean did the rest as he blasted his way into the end zone at the 9:02 mark of the first quarter.

Crockett’s first possession of the game started at their own 37 and went nowhere. Bulldog QB Jadyn Collins was thrown for a loss on first down and then suffered back-to-back incompletions, forcing Crockett to punt.

Woodville took possession at their own 34 and three plays later gave the ball right back to the Bulldogs. A third-and-10 pass from Fowler was picked off by Ta’Marion Manning at the Crockett 35 and returned to the 46 giving the Bulldogs excellent field position.

On first down, Keshun Easterling lost five. He picked up six on second down but a third-and-nine pass from Collins fell incomplete, forcing Crockett to punt once again.

Antonio Cruz boomed a punt down to the Woodville nine, putting the Eagles in a deep hole. A two-yard pick up from Kibble was followed by three consecutive runs by Prejean to move the ball out to the 26. Fowler connected with Lloyd Evans for 18 while Prejean added nine more to move the ball across midfield.

After an incompletion, Fowler found Ralon Williams along the sideline for a 43-yard TD reception. Standley tacked on the PAT and with 3:06 left in the opening period of play, the Eagles now led 14-0.

As the second quarter began, the two teams exchanged punts, with the Eagles eventually taking possession at their own 24. Prejean rattled off 16 yards on first down. Fowler found Kibble for five and then Prejean did the rest as he took a pitch, turned it up field and then outraced everyone to the end zone. Standley was good on the extra point and with 4:28 left in the second quarter, Woodville now led 21-0.

Another three-and-out from Crockett gave the ball back to the Eagles at the Crockett 38. Four plays later, Prejean slammed his way across the goal line for his third TD of the half. Standley knocked home the extra point and with 48 seconds left in the second quarter, the Eagles now led 28-0.

The Bulldogs finally found some offense the next time they had the ball. Following an incompletion, Collins connected with Jace Johnson for nine and Crowley Pierce for 21. Unfortunately, that was as far as Crockett would get as the half came to a close with Woodville up by a score of 28-0.

Following the halftime festivities, the Bulldogs returned to the field with a renewed energy. Johnson took the second half kickoff all the way to the Woodville 35, giving Crockett its best field position of the night.

Easterling picked up 12 on first down but was held for no gain on the next play. An illegal procedure call pushed Crockett back to the 28, but on the next play from scrimmage, Easterling took the handoff from Collins and found the edge. He made an Eagle defender miss and then slipped down the sideline for a 28-yard TD. The extra point was blocked, but with less than two minutes gone in the second half, the Bulldogs had cut the lead to 28-6.

The Crockett defense also stepped up on the Eagles’ ensuing possession as the Bulldog D forced a three- and-out. Crockett took over at its own 11. A pair of Easterling runs moved the ball out past the 20. Collins found Devin Bedford for 13 and then Easterling added another five.

It seemed like momentum had switched sides and Crockett was about to get back into the game. Unfortunately, an injury to Collins on the next play appeared to take the wind out of the Bulldogs’ sails.

Collins was sacked for a loss of five and as he was being tackled, he was injured. Pierce came in at QB and picked up 10 but a fourth-and-four came up short, giving the ball to Woodville at the Crockett 39.

The Eagles took advantage of the opportunity and marched down the field to score on a Kibble 6-yard touchdown reception to make the 35-6, after the PAT.

The remainder of the game saw the two teams slug it out in the middle of the field as neither one could generate any offense until a late touchdown by the Eagles wrapped up the scoring and gave Woodville the Bi-District Championship by a margin of 41-6.

The loss brings the Bulldogs’ season to a close with a record of 4-7.