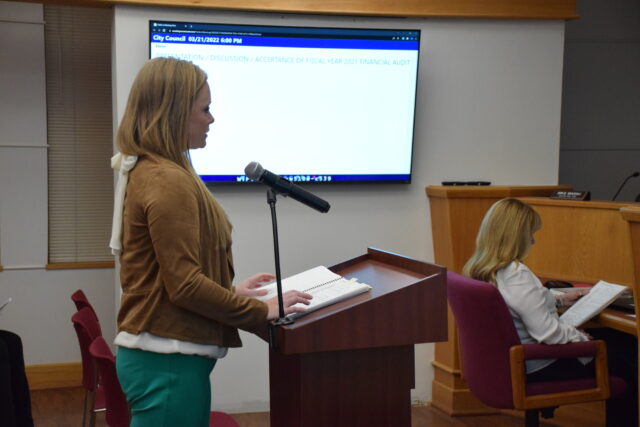 CROCKETT – Before the devastating storms ripped through the city of Crockett on Monday evening, March 21, the Crockett City Council met in a meeting highlighted by questions concerning the Crockett Economic and Industrial Development Corporation.

After the council disposed of several routine matters, Molly Abele – a CPA and partner in the accounting firm of Axley and Rode, LLP – provided the council with an overview of her firm’s findings in the City of Crockett’s 2021 financial audit.

Abele reported the city received an unmodified opinion on the audit which “… is the highest opinion we can give. It states that everything in this financial audit is presented fairly in all material respects.”

The CPA discussed several areas of the city’s financials before she came to the CEIDC portion of the audit.

“Their total revenues were pretty comparable to prior years but the total expenditures increased just over $250,000 over the prior year. Most of that was in incentive expenses,” Abele said.

As she continued, Abele said, “As you are aware, there are a few findings we have worked really hard at in order to get those cleared off. One was with the city and three were with the CEIDC. The one with the city was corrected for the year and two of the items with Economic Development were fully corrected while one item with pre-signed checks was only partially corrected.”

She said it was her understanding that all board members had been approved as signatories for CEIDC checks in the event one or more of the board members or Executive Director James Gentry were not available to sign.

“They were still, as far as I’m aware, still signing checks before they are written. It is a good control for the person who is going to sign the check, especially the board member, to have that oversight of ‘I’m not going to sign until I see what the check is written for,” she said.

Once Abele concluded her presentation, Mayor Pro Tem Mike Marsh asked the CEIDC Executive Director if the practice of pre-signing checks was still occurring and if there were any current checks that were pre-signed.

Gentry replied there were not and Marsh asked if the concern was raised over a year ago, why was it on this audit.

Several minutes of discussion occurred before Crockett Mayor Dr. Ianthia Fisher said the citation involving the pre-signed checks “… affects the city’s funding and has put the funding we are getting from other state entities at risk. It is putting the city in a position where we will not get any more money.”

Councilman Gene Caldwell asked what the city had lost so far pertaining to funding.

City Administrator John Angerstein said the city had been able to regain “… reimbursements we had requested but they were put on hold. They froze all of our accounts until we submitted a corrective action plan.”

Marsh made a motion to approve the audit but also included a secondary item to call a special meeting to further discuss the CEIDC matter.

“This affects us as a city to get grants and stuff like that. This is unbelievable,” Marsh said.

The motion was approved and a special meeting has been called for Monday, March 28.

Prior to the CEIDC and audit discussion, Joseph Tuggle gave a presentation on his Eagle Scout Project in Davy Crockett Memorial Park. Joseph indicated he had constructed six benches around the disc-golf course in the park. He provided the council and those in attendance with a power-point presentation showing the steps he took and the progression towards the finished project.