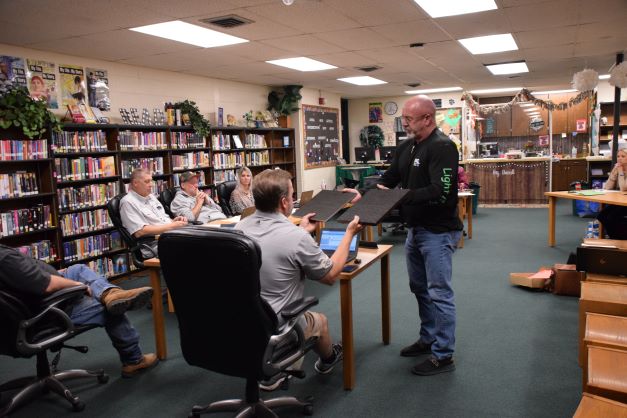 LATEXO – The Latexo Independent School District Board of Trustees met in a regularly scheduled meeting on Thursday evening, March 10, highlighted by an update on the construction projects in the district.

Joe Sumner with the construction firm of Berry and Clay serves as the site superintendent and was on hand to provide a report on the progress of the endeavor.

“We are seeing some real progress over there. Today, they got the roof put on the dining hall. The walls are up and next week we have AC coming in to do their set up so we can get the roofers in. The electricians should be over there next week. We’ll run some piping over for the AC units and then we should actually have a roof on it, starting next Wednesday or Thursday,” he said.

“Over here at the big gym,” Sumner continued, “it’s kind of stagnant but there is actually a lot going on. There are a lot of conduits which have to be run up on the ceiling height. All that stuff has to go in before we can put the ceiling in. They will be there for the next four or five days. After that, we will get the iron guys back to start putting the roof on for us and the walls along with everything else. It’s getting exciting to see some actual stuff going on.”

Once Sumner concluded, Frank Marzullo, with DC LED Optoelectronics, also on hand for the meeting, was asked to provide information on the proposed new marquee. As he began his presentation, Marzullo provided an artist’s rendering of what his company was proposing.

“They are both capable of pictures, video and they do have an audio output on the signs. Everything is wireless communication,” he added.

Several other technical matters were discussed but no action was taken on the marquee.