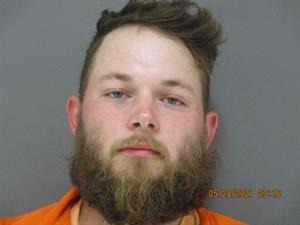 HOUSTON COUNTY – An argument among friends took a violent turn last Friday when a Bronson, Texas man pulled out a shotgun and fired several rounds through a wall in the general direction of his friend.

Rayce Trevor Barrett, 22, was taken into custody on Friday, May 28 and charged with aggravated assault with a deadly weapon, as well as one count of deadly conduct, following the incident.

According to an affidavit of probable cause, Houston County Sheriff’s Office Deputy Curtavius Watts was dispatched to a residence located near the area of CR 3230 last Friday in reference to a shots fired call.

When Deputy Watts arrived at the location, he made contact with the person who the gunfire was allegedly being directed towards.

The victim informed the deputy that he “… and his friend/roommate Rayce Trevor Barrett got into a heated argument. (He) said the two were arguing and Rayce was acting abnormal. (He) then called Rayce’s wife to tell her about what was going on when Rayce got even more angry and was asking why Clay had his wife’s number. Rayce then accused (him) of messing around with his wife.”

The affidavit went on to state at this point the victim went inside the house “… and that’s when Rayce got his semi-automatic shotgun and fired multiple times through the wall in the direction of (the victim).”

The victim informed Deputy Watts when Barrett shot through the wall, multiple wood splinters hit him in the chest. He went on to say Barrett also discharged an AR-15 inside the residence.

The deputy photographed the injuries sustained by the victim as well as the gunshots which penetrated the walls of the residence. Watts also photographed the visual evidence of multiple AR-15 rounds in the kitchen wall.

After being shot at, the victim stated, “He then left the house by running out the backdoor and began to run down the driveway. (He) said that while he was running down the county road, Rayce shot a few more times in the air.”

A bedroom in the residence was determined to belong to Barrett and a black, semi-automatic shotgun, along with an AR-15, were found inside the room.

“Deputy Watts then read Rayce his Miranda rights and started to question him about what happened. Rayce stated the two got into an argument, but he did not shoot at him,” the affidavit stated.

Barrett was transported to the Houston County Jail where he was booked in custody on a second-degree felony charge of aggravated assault with a deadly weapon. He was also charged deadly conduct, a Class A misdemeanor.

Barrett’s total bond was set at $30,000. It was posted on May 29 and he was released, pending further legal proceedings.