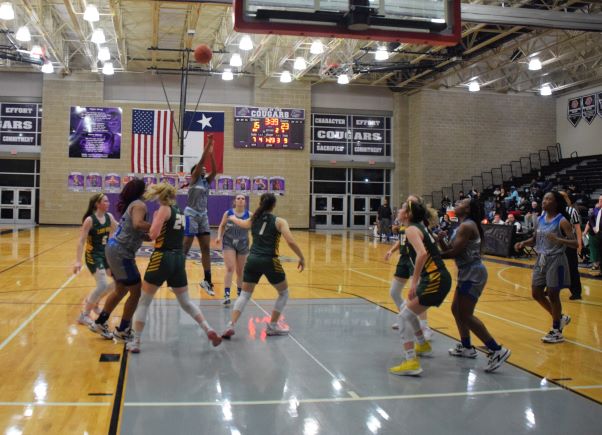 COLLEGE STATION – There was good news and bad news out of College Station on Monday evening. First, the Crockett Lady Bulldogs returned to the postseason for the first time in three years as they opened the 2022 playoffs in the home city of Texas A&M University.

The bad news was Crockett drew the #22 Academy Lady Bees as their Bi-District opponent.

The game was held at College Station High School and for the first half, Crockett held their own. Unfortunately, the Lady Bulldogs were unable to keep up with the Lady Bees in the second half as they fell by a final score of 62-36.

Academy opened the game on a 10-2 spurt and looked to have Crockett on the ropes in the early going as the Lady Bulldogs were forced to call a timeout at the 6:02 mark of the first.

Both teams began to rack up fouls left and right as there were several collisions which knocked quite a few players to the floor. As a result, the Lady Bulldogs were in the bonus before the first quarter came to a close with the Lady Bees up a count of 17-9.

Ty’Reyanna Beasley, Tania Davis, Chelsea Walker and A’Nayah Wooten all scored two for the Lady Bulldogs in the first while Tocarra Johnson made one of two from the line to round out the Crockett first quarter.

Ellie Erwin paced the Lady Bees with six in the opening quarter while Rhea White had four. Payten Conde drained a three-pointer while Errin Bestick and Hannah Garmon had two apiece to round out for the Academy first period scoring.

The fouls continued to mount in the second quarter and quickly became an issue for both teams. Bestick picked up her third for Academy while Crockett’s Johnson was hit with her fourth with 6:34 left in the half.

Despite the foul problems, the Lady Bulldogs only trailed by eight with four minutes left in the second and cut the lead to six with three left to play. That was as close as Crockett would get, however, as Academy closed out the half with a 26-19 lead.

Davis dropped in five second quarter points for the Lady Bulldogs while Walker had three and Wooten had two.

Conde paced the Lady Bees with three points in the second while Erwin, Garmon and Aislinn Chaffin all had two apiece to close out the first half.

Following the break, the Lady Bulldogs went cold from the floor and didn’t score their first field goal until the 3:15 mark of the third quarter.

Crockett’s points came from Walker converting three of four from the line and Davis dropping in a short jumper.

Meanwhile, at the other end of the court, the Lady Bees started to pull away. Chaffin and Erwin both dropped in eight while Conde and Briann Warehime had three apiece as Academy opened up a 48-24 lead at the end of three.

The fourth quarter saw the Lady Bees put the game away. Erwin continued to have a hot hand as she put in six while Conde added five more. Chaffin also hit a three-pointer as Academy closed out the game to win the Bi-District Championship by a final score of 62-36.

The Lady Bulldogs fourth quarter points came from Johnson with six and Wooten with five while Beasley made one of two from the line to close out the Crockett scoring.

On the game, Academy’s Ellie Erwin led all scorers with 22 points. Payten Conde was also in double- figures with 14 while Aislinn Chaffin had 13. Other scorers for the Lady Bees included: Hannah Garmon and Rhea White, both with four; Briann Warehime with three; and Errin Bestick with two.

The Lady Bulldogs points came from Tania Davis and A’Nayah Wooten who both had nine. Chelsea Walker had eight, Tocarra Johnson netted seven and Ty’Reyanna Beasley added three to round out the Crockett point production.

While it wasn’t the way, the Lady Bulldogs wanted it to end, they should be congratulated on a great season and making it back to the postseason for the first time in several years.

Crockett ISD to Induct Four into Ring of Honor
Lady Tigers Shut Out Sandiettes, 7-0
Sandies Defeat Bobcats in Bi-District, 87-71
Please follow and like us: