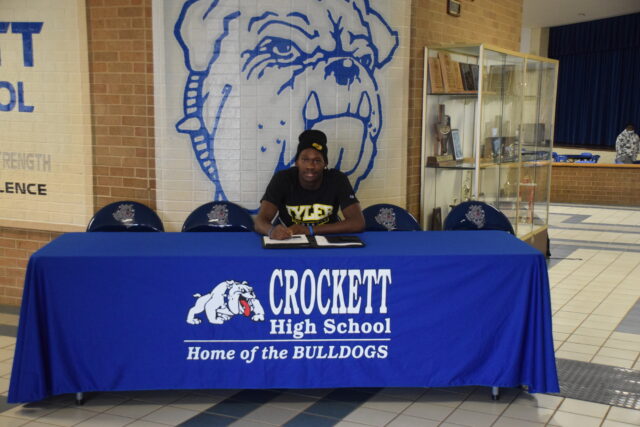 CROCKETT – Wednesday, Feb. 2 was National Signing Day – when a select contingent of high school football players were eligible to commit to the college of their choice. Some of the most talented players in the area announced their decision on where they will be playing after high school and one such player was the Crockett Bulldogs’ Keshun Easterling.

Keshun, a 6’0”, 185-pound running back, will be taking his talents to Tyler Junior College in the Fall of 2022 and on Wednesday morning he made it official as he signed his National Letter of Intent to trade in the Bulldog blue and white for the Apache black and gold.

Once all the pictures with family, friends and teammates had been taken, Keshun sat down with The Messenger to discuss his decision.

“I felt like it was the best fit for me and my family. I wanted to stay close to home and I feel like I can show something as a JUCO (junior college) prospect,” he said.

Asked to describe the recruiting process, the soon-to-be Apache said, “I had a lot of colleges interested in me like Southeastern Oklahoma but then I came upon TJC. I had great communication with the head coach (Thomas Rocco) and there was good chemistry. I felt like TJC would be the best home for me.”

As to when he realized he might be able to continue his athletic career at the next level, Keshun explained it was at the start of his junior year at CHS.

“I was coming off of a good season with Coach (Jimmy) Thompson and that summer, I just worked my tail off. Then, I got with Coach (Alton) Dixon and he showed me a few more steps to get to the next level,” he said.

To get to that next level, Keshun said he would advise his teammates to “… keep striving, work hard and keep God first.”

He expressed his appreciation to his mom, his teammates and to Coach Dixon for helping and supporting him along the way.

CISD Athletic Director and Head Football Coach Alton Dixon, who was on hand for the signing, was asked for his thoughts on Keshun’s commitment to TJC.