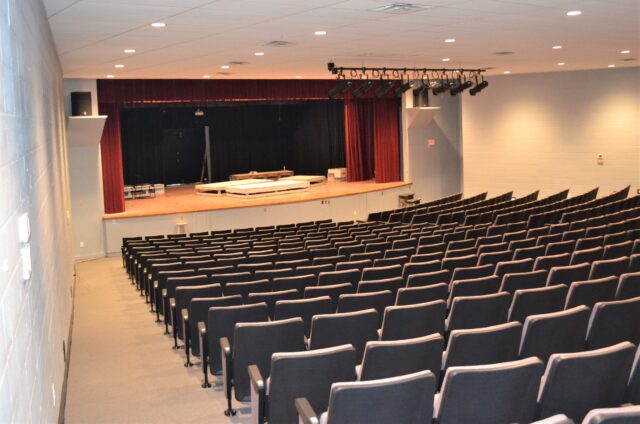 GRAPELAND – Phase one is complete and the Lorena Shoultz Auditorium looks brand new. It smells brand new. It is beautiful and shiny and considerably more inviting. But Grapeland’s crown jewel is still the same in her soul.

Stepping inside the door to the auditorium opens the flood gates and the memories come rushing back. Though I’d sat in many of those old wooden auditorium seats multiple times over the years for school assemblies, plays and the like, I didn’t have the pleasure of becoming intimately involved with the auditorium until the spring of 1981. I was a freshman crew member for the UIL One Act Play that year, and watched my friends earn a trip to Austin from the wings. From then on, the Lorena Shoultz Auditorium was like home.

Despite leaving my mark in several places, it looks as if they’ve all been erased with the new construction. My friend, Alice Goncharenko, recently purchased a row of seats during the demolition phase. On the back of one seat, she discovered my declaration of love to my now wife of almost 34 years. I carved it in there when I was 16. Apparently, my son had discovered it years later because another seat back on her newly acquired row revealed his own carved message left for posterity. I’m happy to know that it will live on. At the auditorium, however, fresh sheetrock, paint and new seating has covered any other scars I may have left on the old auditorium alongside the many other delinquent youth who may have joined me over the decades.

The cleanup, however thorough and beautiful, has still left the memories and feelings intact. The seats, however, are infinitely more comfortable than those they replaced. Excellent choice.

The auditorium, namesake of beloved former Grapeland English, Theater and Speech teacher, Mrs. J.C. Shoultz, has been the site of many big moments in Grapeland’s history. One-act play performances, talent shows, concerts, and Christmas pageants have entertained thousands. Generations of Peanut Queen contestants have graced the stage in hopes of winning the crown that currently only 76 young ladies have ever held. The history of Lorena Shoultz Auditorium is rich and reflects that of the beautiful community that surrounds it. The makeover is a fitting upgrade for such an amazing place.

Renovations on the auditorium began last year. The goal was to finish by Peanut Festival, but construction and transportation issues negatively affected the timeline.

Phase one, however, is now complete. The auditorium has received new HVAC, Painting, Lighting, Ceiling and Seating, and the results are fantastic.

These renovations are the first of three phases. The auditorium is slated next for stage and sound upgrades, then an exterior facelift which will change the dynamics of entry to the building.

The generations of students and residents who have so many memories of the beautiful Lorena Shoultz Auditorium will, no doubt, be impressed by the makeover, and future generations will enjoy the facilities, whether from the stage or the seats, for many years to come.