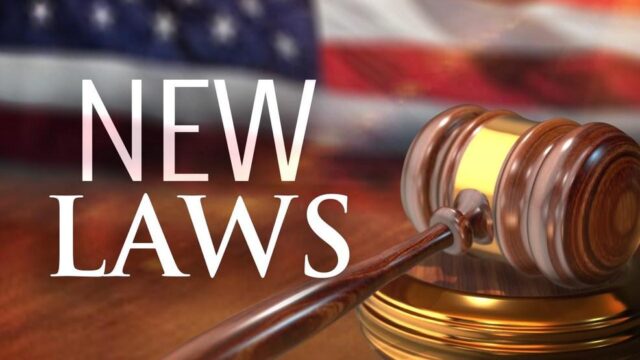 EAST TEXAS – While the 87th Texas Legislature has been called back for a special session by Gov. Greg Abbott, the lawmakers did manage to pass a quite a few bills during the regular session which concluded at the end of May.

Many of these bills will become law on Sept. 1 and below is a list of some of these soon-to-be laws.

HB 1927 Constitutional Carry – This law eliminates the requirement for Texans to obtain a license to carry handguns, as long as they are not prohibited from possessing a gun by State of Federal law.

SB 8 Fetal Heartbeat Bill – This law prohibits abortions in Texas after a fetal heartbeat has been detected, which can be as early as six weeks.  An exception for medical emergencies is allowed.

SB 4 Star-Spangled Banner Protection Act – This law requires any professional sports team with contracts with the Texas state government to play the National Anthem before the start of every game.

HB 1239 Ban on Church Closures – This law bans State agencies or officials from issuing orders that “close or have the effect of closing places of worship in the state.” This bill was inspired by public orders to close churches and other places of worship during the COVID-19 pandemic.

HB 3979 Critical Race Theory – This law bans the teaching of Critical Race Theory, and prescribes how Texas teachers can talk about current events and America’s history of racism. “Critical Race Theory” asserts that race and racism are an integral part of American history and society. The bill includes a list of historical documents that students must be taught. It also requires that students be taught “the history of white supremacy, including but not limited to the institution of slavery, the eugenics movement, and the Ku Klux Klan, and the ways in which it is morally wrong.”

HB 5 Broadband Internet Access – This bill creates a “State Broadband Development Office” which will award grants, low-interest loans, and other incentives to build broadband access in Texas, especially in rural areas. It is estimated that nine million Texans (out of 28 million total Texans) do not have broadband internet service.

SB 2 and SB 3 ERCOT Reform – These bills aim to prevent another state-wide power failure, like Texas experienced in the extreme freeze in February. SB 2 re-organizes the Board of Directors of ERCOT (Electric Reliability Council of Texas), the organization that manages the Texas power grid. In the re-structured Board, the State would appoint a majority of the Board members. SB 3 requires electric power generators to update equipment to be resistant to extreme temperatures.

SB 968 Vaccine Passport Bill – This law bans any business in Texas from requiring “vaccine passports” or any vaccine information.

HB 1024 Alcohol-To-Go – This bill makes permanent the permission for restaurants to sell alcohol on a “To-Go” basis, as long as it is ordered with food. Restaurants had been given temporary permission for this during the COVID-19 pandemic. Pick-up and delivery are both allowed.

HB 1540 Paying for Sex a Felony – This law elevates the penalty for paying for sex from a misdemeanor to a felony. The authors of the bill contend that prostitution is the prime driving force behind human trafficking, and hope that felony penalties will reduce the demand for paid sex, and thus reduce the incentive for human trafficking.

Medical Marijuana – This law makes medical marijuana available to patients of cancer and post-traumatic stress, if prescribed by a doctor.

Protection for Employees Filing Sex Harassment Claims – Currently only employers of 15 or more employees can be sued for sexual harassment in Texas. This new law makes all employers or persons in a management position subject to sexual harassment claims. It also extends to 300 days, from 180, the number of days a claimant has to file.