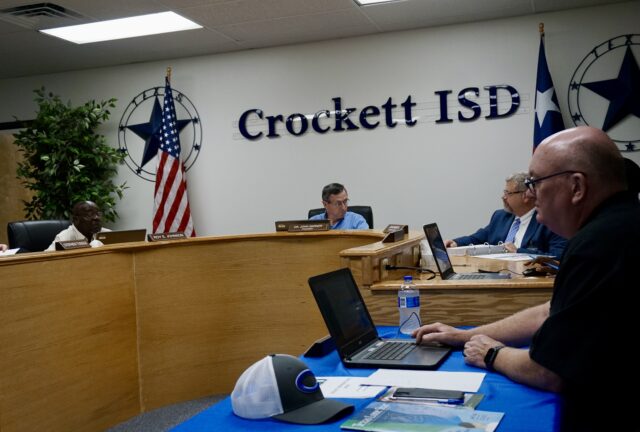 CROCKETT – The Crockett Independent School District (CISD) board of trustees met Monday, Sept. 26 for a regular stated meeting. On the agenda this night were discussions of “credit recovery” and a presentation of the districts goals and objectives for the schools.

In the public comments section, a parent commended the CISD Athletic Director for his improvement in the culture and behavior of the varsity football players. She noted that there were some issues with both the referees and fans – but the kids kept their composure and did not let the situation out of hand. Another parent called for the junior varsity team to be expanded or integrated into the varsity squad. At the present time, there are only three members of the JV cheerleading squad.

CISD Superintendent John Emerich thanked local business Doc’s Barbecue for offering discounts to employees at the district. He said this showed great integration between the community and the district.

Emerich mentioned the “credit recovery” system the district employs to track students that have left school. If a student leaves in after ninth grade, the student is considered to be a drop-out – even if they have enrolled in another school. Emerich explained if the student went to a Texas school the district can confirm their enrollment and that student won’t be counted against the district. If the student has gone out of state or out of the country – the district might be charged with that drop-out if they have no other information about the student.

Emerich explained students that drop out because of “Can’t” or “Won’t.” He said if a student simply “won’t” come to school there is little to be done. He told attendees that in the case of a “can’t” – the district works hard to help the students get back into class. Emerich said the district can offer students everything from online classes and catch-up classes – to even food and clothes to help students stay and finish school.

The CISD ag department will be holding a competition Saturday, Oct. 15 in the parking lot of the Porth Ag area. The ag department has gathered axles, and students will compete to build a trailer during the day. Emerich noted welding is an important skill for the kids to master, and NUCOR-Vulcraft is donating all the extra steel needed for the kids to complete the project.  Emerich invited citizens to come early and again later in the day to see the progress the students make.

Emerich told the board the district now has generators covering all of the campuses and most of the administration buildings – he said in the event of an area-wide power outage the children would at least have a place to go and the district could cook.

Assistant Superintendant Brian Aiken presented the board with the goals and objectives for the district and for each campus. Board President Dr. John Garner explained to the crowd the packet for board members was 356 pages – such was the detailed work that went into the preparation of the goals.

A motion was made to change how the public submits and presents public comments to the board. The new rules would mean public comments must adhere to the meeting agenda – thus allowing board members to discuss the comments made by the public. The comments would have to be submitted in advance. The motion did not pass.