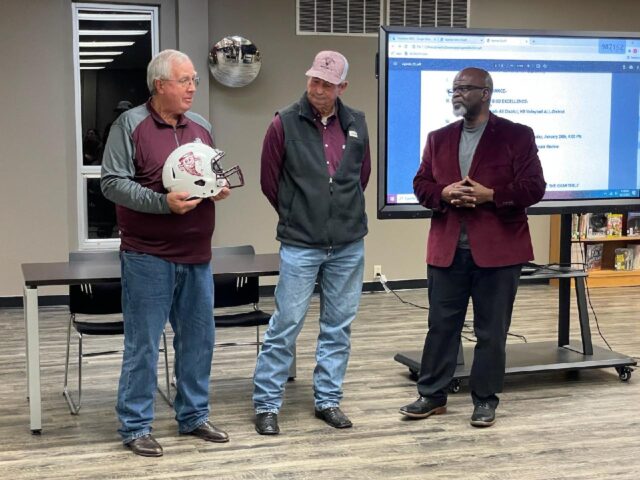 GRAPELAND – The Grapeland Independent School District Board of Trustees met in their last meeting of 2021 on Monday, Dec. 13.

The meeting was opened by GISD Superintendent Don Jackson who requested GHS student Morgan Terry to provide the invocation while the Pledge of Allegiance was led by Trip Satterwhite.

Once the prayer and pledges concluded, the superintendent requested former GISD Board Member Mitchell Huff to come forward so he might be recognized for his service to the GISD community as the public address announcer at the Grapeland Sandies’ football games.

Huff spent 26 years in the press box announcing games for Grapeland. Board member Allen Cheatham spoke for the board when he said Huff was very much appreciated for his service to the community and that he would be greatly missed. He was also presented with several mementos, including a Grapeland Sandies’ helmet emblazoned with #26, representing the number of years Huff spent as the “Voice of the Sandies.”

Following Huff’s recognition, All-District football and volleyball players were recognized by the trustees. Then, those in attendance were given a special treat when fifth graders from Grapeland Elementary gave a presentation of the Christmas carol “Silent Night” in sign language.

Before moving into the actionable item portion of the agenda, a group of secondary teachers expressed their gratitude to the GISD Trustees for the recently received $1,200 stipend. Para professionals received $600. The stipends were made possible through the American Rescue Plan Act – Elementary and Secondary School Emergency Relief (ESSER) programs.

AS the meeting continued, GISD Maintenance Director Chris Watson provided an update on the Lorena Shoultz Auditorium renovation. Watson reported the carpet is in, the sound booth has been built, the lighting has been done, the ceiling is in place and the painting is finished. The next big item, according to Watson, is the installation of chairs.

Watson went on to say the concrete slab for the new Ag classroom has been poured and Huff Welding is in the process of erecting the structure.