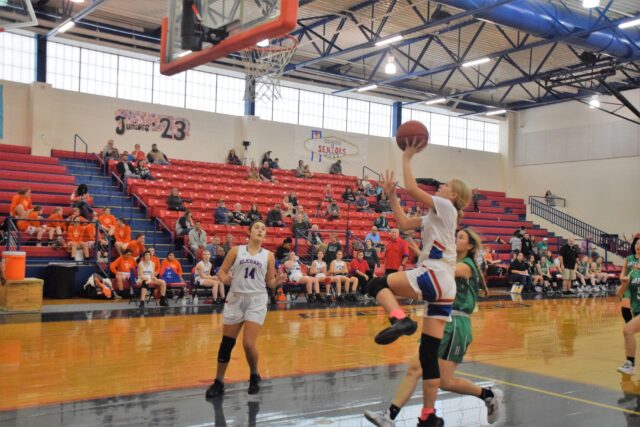 ELKHART – It’s tournament time in the world of hoops for both the boys and girls. While area teams will be scattered to the winds over the next few weeks, a few teams are staying close to home. Slocum is in the midst of their annual tournament and just up the road, so is Elkhart.

The 2021 Elkhart Lady Elk Basketball Tournament got underway on Thursday of this past week as the Lady Elks welcomed six other teams to town. The teams included: Hill Country Christian School (HCCS); Latexo; Mt. Enterprise; Trinidad; Cross Roads; and Wells.

During pool play on Friday afternoon, Elkhart took on the Latexo Lady Tigers to see who would advance to the third-place game on Saturday. The Lady Elks and Lady Tigers had both lost to HCCS on Thursday, setting up Friday’s must-win.

As the game got underway, the Lady Elks opened on an 8-0 run which forced the Lady Tigers to call a timeout. Following the TO, Latexo seemed to refocus as they rattled off five straight points, behind three from Malley Moore and two from Charlee Biano.

The Lady Elks snapped the Latexo run on a free throw from Jordan Luman who led Elkhart’s first quarter charge with four points. Luman was joined in the scoring column by Hadley Waldon with three and Jimena Espinar-Crespo with two as Elkhart led by a score of 9-5 after the first eight minutes of play.

The Lady Tigers cut the lead to a single basket on two occasions in the second quarter before Elkhart slowly began to pull away. Skylar Hamby paced the Lady Elks with six points in the period while Taylor Teems dropped in four. Belen Maldonado knocked down a pair of free throws while Waldon chipped in one as Elkhart pushed its lead out to 22-11.

The Lady Tigers second quarter points came from Biano, Skylin Andrus and Natalie Moore who all had two apiece.

After the break, the Lady Tigers cut the lead in half during the opening minutes of the third quarter. Biano drained a shot from behind the arc while Samantha McKenney worked inside for two.

Elkhart went scoreless in the first four minutes of the period and then hit five quick points to go back up by 11. Latexo responded with four of their own but the Lady Elks finished the quarter strong to go up 32-22 with eight minutes remaining in the contest.

Biano hit her second three of the game at the 7:17 mark of the fourth to trim the lead to seven, but that was as close as the Lady Tigers would get as Elkhart pulled away to win by a final score of 46-28.

The Lady Tigers were paced by Charlee Biano who had a game-high 12 points. Natalie Smith dropped in five while both Skylin Andrus and Samantha McKenney had four apiece. Malley Moore rounded out the Latexo scoring with three.

The Lady Elks were paced by three players – Skylar Hamby, Taylor Teems and Hadley Waldon – who all had 10 apiece. Jimena Espinar-Crespo was hot on their heels with eight while Jordan Luman had four. Belen Maldonado and Lilly Gray both had two each to close out the Elkhart point production.