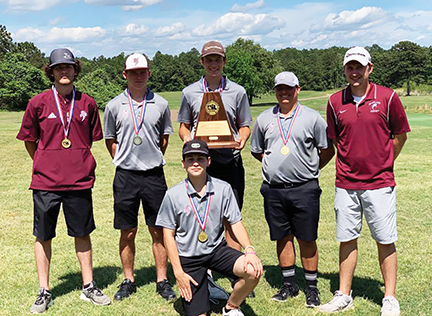 FRANKSTON – These guys are good.  For the fifth consecutive year in a row, the Grapeland Sandies Golf Team is headed to state. In 2014, the Sandies finished fifth. 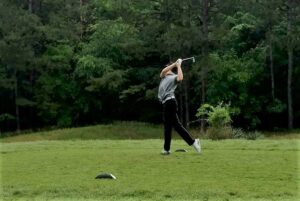 In 2015, Grapeland moved up to second and in the last two years, the Sandies have brought home the Class 2A State Golf Championship.

To get back to Austin, however, Grapeland had to work its way through the Region III Golf Tournament held at Pine Dunes Golf Club and Resort located outside of Frankston.

The course is a 5,819 yard par 72 layout with several water hazards and lots of sand. Combined with the saturated fairways and greens, the top regional golfers struggled as only one player shot under par on the first day and that was Douglass’ Trevor Roquemore with a 70. 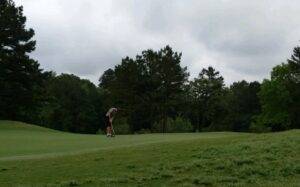 Grapeland’s Rick Frauenberger shot a 75 on Day One and found himself five strokes behind Roquemore, while the team was also in second place. Lovelady’s Seth Campbell was just a shot behind Frauenberger with a 76.

On Day Two, Frauenberger caught fire and shot the low round of the tournament with a 67 for a two day total of 142.

It didn’t seem like it was going to be a great day of golf for Frauenberger as he fell behind by seven shots after the first two holes. A birdie on the ninth hole by the two-time defending state champ and a double bogey from Roquemore cut the lead to four. Once again, Roquemore pulled ahead by five shots, but a birdie from Frauenberger and a double bogey from Roquemore on the 13th green cut the lead to two shots.

On 14, Roquemore bogied to cut his lead to one and when Frauenberger birdied 15, the match was tied. Both golfers birdied 16 and 17 to set up a dramatic showdown on the 18th green.

While Frauenberger was in battle for the individual title, his teammates Blake Howard, Josh Ackley, Jason Bobbitt and Jack Woodford quickly overcame the four shot deficit they faced to start the day and with their ace shooting a 67, the Sandies pulled away to capture the team title.

With a dog leg and water to the right, the par 5 hole proved difficult on both days. After overcoming a seven shot deficit, however, Frauenberger had a birdie putt to take the outright lead but just missed it as the ball trickled by the hole. 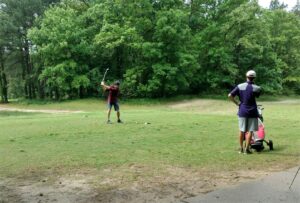 Roquemore, however, still had chance to stave off Frauenberger’s spectacular charge. He had one last putt for birdie and the senior for Douglass drained it for a one-shot win, with a two-day total of 141.

Lovelady’s Seth Campbell will also be making the trip to Austin after he carded rounds of 76 and 71 to finish in third with a combined score of 147.

The boys’ tournament is scheduled for May 20 and 21 at the Roy Kizer Golf Course in Austin.  Congratulations to all the golfers and good luck at the state tournament.