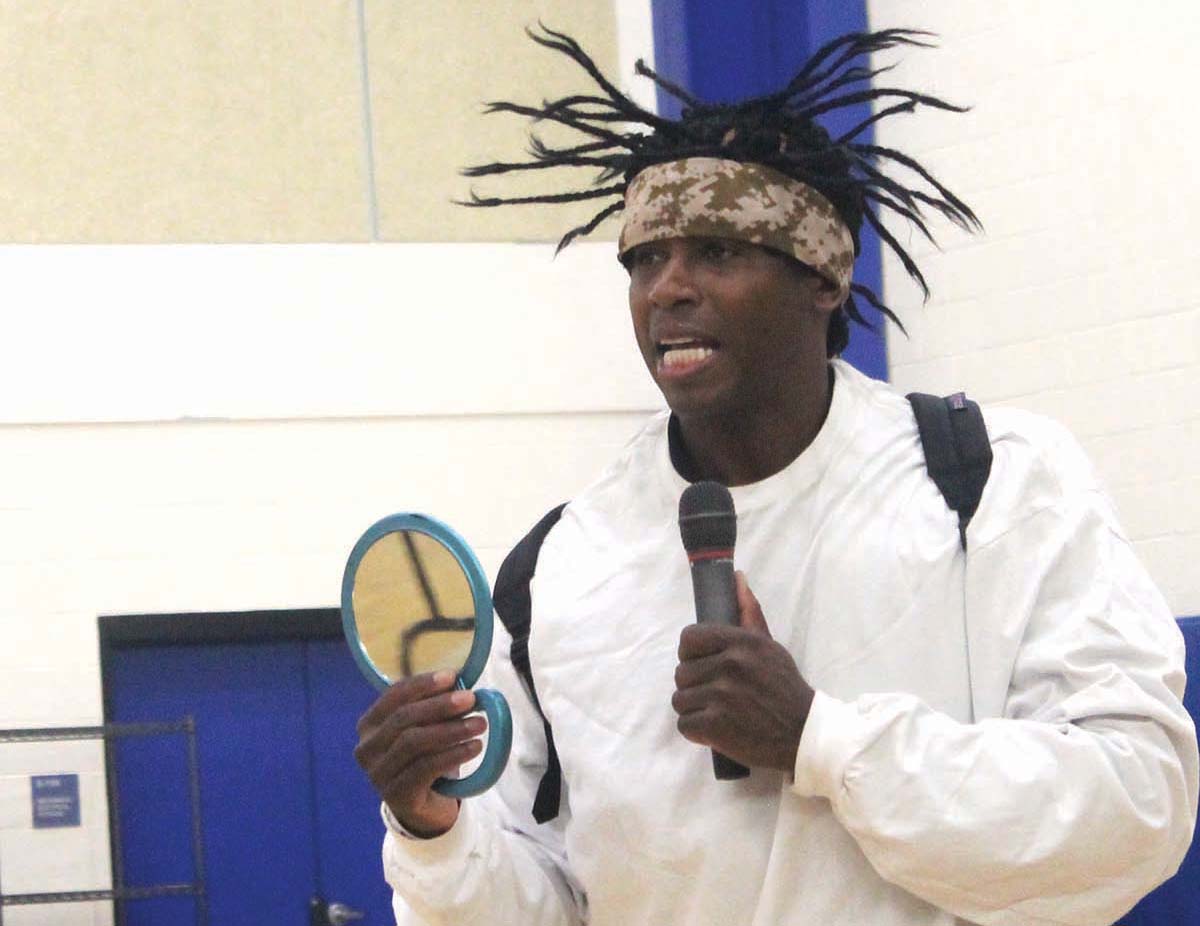 CROCKETT – For those who were not present at Dr. Adolph Brown’s February appearance in Crockett, confusion was surely among the emotions they felt while watching him strut onto the floor of the Crockett Junior High gymnasium Tuesday, Sept. 18. Dressed in an oversized long-sleeved shirt, baggy pants, sneakers, and a bandana headband over dreadlocks which protruded in all directions, the World’s Greatest Edu-tainer ™ looked like someone who had taken a wrong turn on his way to a rap music video shoot.

The outfit, Dr. Brown explained to his audience, was something of a relic from days gone by.

“This was how I walked around school,” he said. “This is what I looked like when I was sad.”

Dr. Brown shared that his parents divorced when he was two years old and he was estranged from his father until he was 18 years old.

“There was something I talked to the students today about,” Dr. Brown said. “And if they remember what university they went to, maybe they’ll say it.”

This statement prompted the students who were in attendance at Dr. Brown’s earlier presentation to shout, “No excuses!”

Dr. Brown went on to divulge that when he was 11, he lost his older and only sibling, Oscar, at the hands of a murderer.

Again, the students responded, “No excuses!”

Accompanying Dr. Brown was Jahzeel Mumphrey, whose mother used drugs while pregnant with him.

The answer was another resounding, “No excuses!”

“He didn’t let it define him,” Dr. Brown pointed out. “His grandmother took him and reared him. He was teased. They told him all sorts of things. ‘You won’t amount to anything.’ But he said, ‘No excuses.’”

Dr. Brown encouraged those in attendance to avoid letting negative occurrences define who they become.

“This is who I was,” Dr. Brown said in reference to his wardrobe. “I was a young man who took 20 minutes to take four steps.”

Dr. Brown recalled his grandfather encouraging him to “check yourself before you wreck yourself.

According to Dr. Brown, his decision to make his entrance donning his past wardrobe was for a number of reasons.

“One was to show you what I used to look like,” he said. “But I also wanted to let you know that there’s some things in society that a lot of people don’t understand and that we’ve got to give young people a fighting chance.

“When I came out here like this, maybe some of you felt a little familiar with me,” Dr. Brown said.

Dr. Brown cited Buckwheat from “The Little Rascals,” rap artist Coolio and Crazy Eyes from “Orange is the New Black” as examples of individuals he resembled in his getup.

“The bottom line is, when people aren’t familiar with something, their brain makes them think of where they’ve seen that type of person,” Dr. Brown explained. “So, if I don’t have friends that look like this guy, but I look on the news and see a guy that looks like this, that’s when I start thinking about that guy.”

Dr. Brown expressed his desire to convince those with which he comes in contact “not to believe everything they think.

“Research says that if you see someone that you don’t know, your brain tries to find where to put that person,” he explained. “So, if you only ever see me on the news like this, guess how you’re likely to treat me. I do this to bring attention to some things that we have in society.”

As Dr. Brown pointed out, the way in which he previously dressed could have made things difficult for him in the event that he continued it as he grew older.

“When I walk into somebody for my job, maybe I’ll get it,” he said. “But then, let’s go after high school, when I want to get a business loan to start my entrepreneur adventure. When I walk into the bank in Crockett dressed like this, one of two things are going to happen. Either I’m going to be denied on the spot because I just don’t look like I can pay it back, or everybody in the bank’s going to take one look at me and scream.”

Such a response, Dr. Brown informed, “doesn’t make anyone a racist.

As Dr. Brown pointed out, the human brain receives more than 11 million messages per second.

To further illustrate his point, Dr. Brown dropped the American flag backpack he had carried onto the floor to reveal a Spiderman backpack that had been concealed within.

“Some of you haven’t looked in your backpack in years,” Dr. Brown said. “And you don’t realize that you might be carrying stuff that doesn’t belong to you.”

Dr. Brown revealed that during his childhood and adolescence, he was under the impression that his father hated him.

“Then, when I met him when I was 18, he said the exact same thing that my mom said,” Dr. Brown said. “They just couldn’t see eye to eye, and it had nothing to do with me.”

Dr. Brown challenged everyone in attendance “to look in the mirror” and strive for “not perfection,” but “excellence.

“I was this guy,” he reiterated. “A lot of doors were slammed in my face. A lot of people judged me without even knowing me.

“My grandfather used to say that life’s unfair, but it’s good,” he recalled. “He said it wasn’t just unfair to me; he said it was unfair to everybody at some point in time. But it’s always good. And he said, ‘Take the good. Always take the good.’ Ladies and gentlemen, tonight, I want to celebrate the good.”

Dr. Brown then showed his audience “what happened when I finally started listening to the people around me” and “looked into the mirror and liked what I saw.”

Shimmying out of his past shell as Michael Jackson crooned “Man in the Mirror” in the background, Dr. Brown revealed to the audience his present-day self.

Dr. Brown also presented his listeners with his “four F’s,” the first of which was fun, which he said “starts at home.

“If you ask any teacher that’s been in this for 20 years or more, they will tell you that they feel like children are coming to school angrier than they have in the past,” he said. “So, parents, we’ve got to have some fun at home.”

Having fun, Dr. Brown said, does not have to require spending money.

Dr. Brown encouraged parents and guardians to “look at your children and smile” more often.

The second “F” presented by Dr. Brown was fair.

“Understand that it’s harder to be a child today than it ever was,” he said. “Listen to the children. Hear them out. Everybody wants to be heard.”

“Every child needs consistency, structure, limits and boundaries,” Dr. Brown said. “My mother told me, ‘Burger King may have great burgers, but you can’t have it your way.”

The final “F” presented by Dr. Brown was faith.