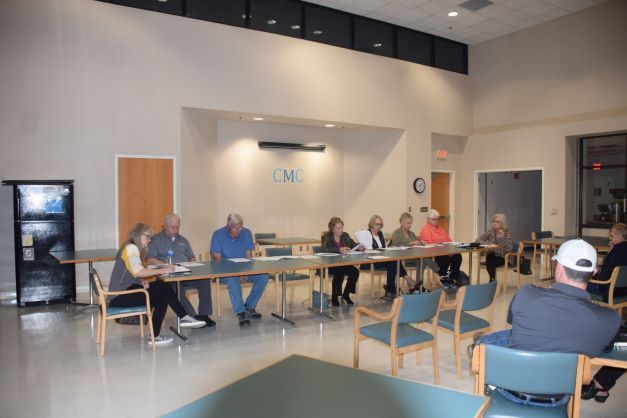 HOUSTON COUNTY – The Houston County Hospital District (HCHD) Board of Directors is taking steps to reduce the district’s debt and during their Tuesday, Nov. 16 meeting, the district took a giant leap when a large chunk of the debt was retired.

After several other agenda matters had been taken under consideration, HCHD President Barbara Crowson asked the board members to consider a resolution approving an amendment to the loan the HCHD had with Prosperity Bank.

“This is the sixth amendment to the promissory note,” she said. “It has been furnished to us by Brandon Bridges of Prosperity Bank as we continue to pay down our significant loan. We are proud tonight to deal with that again.”

The amendment was approved unanimously.

Following the approval of the amendment, Crowson went on to say, “They loaned us in the original principal, the amount of $3.5 million at the original fixed interest rate of four percent per annum. This is a resolution that we approve and authorize the execution and delivery of the sixth amendment, renewing the loan in the current amount of $1.45 million for 12 months at a fixed rate of 4.25 percent per annum.”

She reported the Finance Committee had recently met and “… after discussing the finances of the district, it is the committee’s recommendation to pay Prosperity Bank $225,000 now and $500,000 in February 2022. The note has a fixed rate of 4.25 percent.”

Once the payment has been made, the district’s loan balance with Prosperity would only be $725,000, plus interest. The prepayment to the bank was unanimously approved by the HCHD Board.

Brown added, “I am very proud of our board for working together and reducing our debt and getting it down. This is a good thing for the community. People are struggling right now and I actually see the debt being reduced and lowering the taxes in the future.”

Prior to the payment discussion, Chief Nursing Officer Anthony Cumby provided the directors with the monthly hospital report.

Once the CNO concluded, Crowson reported she had recently seen a Texas Monthly magazine which listed one of the Crockett Medical Center owners, Dr. Kelly Tjelmeland, as one of the Super Doctors in the state of Texas. Crowson went on to say she wanted to extend the board’s congratulations to Dr. Tjelmeland on the honor.

As the meeting continued, Houston County EMS Operations Supervisor Cassie Gallaway provided the directors with the ambulance report. Gallaway reported EMS personnel were dispatched 300 times during the month of October but 50 of those were cancelled before arriving at the scene. There were 65 non-transport calls and 185 patients were transported to an ER. The helicopter service was requested 24 times and made four flights.