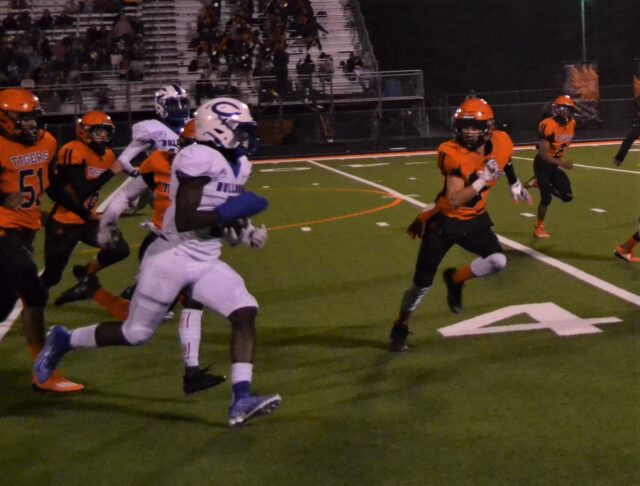 Crockett Comes Out on Top Against a Game Trinity Squad

TRINITY – The Crockett Bulldogs took the field for their final district matchup in Trinity against a determined Tiger squad. First quarter action was back and forth, as the teams traded early scores. The Bulldogs lit the scoreboard first on a 14-yard TD run by Jr. QB Jadyn Collins. The point after kick from Antonio Cruz was good giving Crockett an early 7-0 lead.

Trinity answered back with a solid ground game that got them on the board after a 1-yard score. The Tigers followed with a two-point conversion and led the Bulldogs by a score of 8-7.

The Bulldogs answered with another score by Collins after a series of good ground gains. The point after was good once again and Crockett closed out the first quarter with a 14-8 lead.

The second quarter continued with the Bulldogs seeing success on the ground. A 48-yard scramble by Collins set up a five-yard score by Crockett senior Keshawn Easterling. The point after attempt by Cruz was blocked by the Tigers leaving the score at 20-8 in favor of the Bulldogs.

The ensuing kickoff was fumbled by Trinity, giving the Bulldogs possession at the Tiger 20-yard line. Unable to punch it into the end zone, Crockett settled for a 35-yard field goal by senior kicker Antonio Cruz, giving Crockett a 23-8 lead.

Trinity answered back with a strong drive going the length of the field for another score. The point after attempt failed this time leaving the score 23-14 in favor of Crockett.

Cruz hit another field goal, this time from 31 yards out giving the Bulldogs a 26-14 lead with 48 seconds left in the half.

It looked as if the score would remain 26-14 going into the half, but a timeout gave the Tigers one last shot with 4 seconds left, and they hit paydirt on a screen pass that went 74 yards for the score. Another two-point conversion went the Tigers’ way, and the Bulldogs lead was cut to 26-22 at the half.

The second half of action saw the Trinity squad hit the field still fired up after the long score to close the first half. The Tigers ate up 6 minutes of the 3rd quarter with a 75-yard drive that culminated in a two-yard TD run. The two-point conversion failed, but the Tigers had taken a 26-28 lead with the 3rd quarter winding down.

Fourth quarter action was largely defensive as neither team could find the end zone. Crockett finally made a solid threat to score after a 53-yard run by Easterling gave the Bulldogs a first down at the Trinity 7-yard line. Several penalties backed the Bulldogs to the 25-yard line, but once again Crockett senior Antonio Cruz stepped up to put the Bulldogs back on top with a 42-yard field goal.

A 4th down stop at their own 28 yard line gave the Bulldogs possession with 2:24 left to play. An injury to Easterling saw Crockett senior Crowley Pierce step in at running back. Pierce ran hard, netting the Bulldogs enough first downs to run the clock out and preserve the victory.

Crockett will move on to the first round of the playoffs this Thursday. They will take on the Woodville Eagles at Abe Martin Stadium in Lufkin.