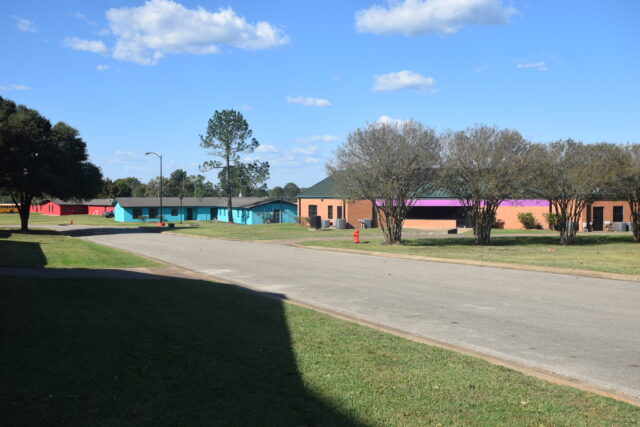 CROCKETT – It took a little while longer than expected but on Thursday, Oct. 28 the Crockett Independent School District finalized the sale of the former state school property for approximately $3.2 million.

Once the property closing concluded, CISD Superintendent John Emerich and Konstantin Savvon – the new owner of the facility – sat down to discuss the transaction and what the future holds for the property.

Following several tumultuous years after the state school was shut down, CISD purchased the property from the City of Crockett for approximately $711,000 with plans to renovate the facilities and incorporate the district’s transportation center into the facility.

“After we bought that,” Superintendent Emerich said, “Angelina (College) announced they were going to leave the building they were in. If you remember, (former CISD Superintendent Terry) Mr. Myers and I had several discussions with them in hopes they would bring some of their accreditation programs over here. They ultimately wound up not being interested in that. We didn’t go the direction we thought we would. Of course, part of the original purchase was to swap the bus barn. We moved that over here, maintenance is over here, and our technology hub is in that area. We also hold our college classes over there.”

Emerich said while the district didn’t utilize the property as extensively as it could have, it was still a good deal but then “… he (Konstantin Savvon) came and knocked on our door. That was when Mr. Myers was still here, and he had some ideas about what he wanted to do. Mr. Myers went and visited some of his properties. I went with him on one of those visits and saw what type of operation he was running. Things were moving forward to make the sale but then COVID hit and that shut the world down. We had a bit of a delay with that, but now that the world is starting to move again, we are moving forward again.”

Asked about how he learned about the facility in Crockett, Savvon clarified he didn’t contact the district directly but was put in touch through a third party.

“I heard about it from a guy named Bobby Foster, who has since passed away, and he put me in touch with Terry and everyone else,” Savvon said.

When questions about his plans for the property, Savvon said, “We would like to hire 300 people, locally. The starting pay would be between $18 and $24 per hour, and we like to operate it as a Residential Treatment Center (RTC).”

As to what an RTC is, he explained it was a center for kids who did not have parents in the picture and those who have emotional and mental disorders. The children would be residing at the property and attending school there, as well.

Concerning the educational provider, Savvon explained he and his organization were currently in the process of vetting several private and charter schools to see which one would be the best fit.

“It will be a privately funded, charter school type program. There are 59 acres over there and we would like to eventually develop some housing over there in the back. Our goals and aspirations are to have 140 homes, but right now, we don’t know how many will go up there. Those homes would be specifically for the transition of these children when they turn 18 so they would have housing while they attend college programs or work at the facility,” he said.

Savvon went on to say he had been involved with RTC’s for the last four years and had several other programs – like the one he envisioned in Crockett – throughout the state of Texas.

Given the history of the state school facility, Savvon was also asked what separates his organization from the other organizations that have occupied the property.

“We have dumped over $1 million into it off the bat. We are a lot better funded than those other programs. There are a lot of bad facilities out there. It is very easy to neglect and do a lot of bad things, but that is true about every industry. Everyone focuses on the negative but there are a lot of good stories, too. What I would say is different about us is the people who were trying to operate it before us didn’t have any money and they weren’t interested in helping kids. They were interested in bilking the state. The entire operation was based around how much money could they get,” Savvon said.

The goal is to have the facility, which will be known as Creighton Ridge, up and running by late-January or February, but it is dependent on the state licensing process, according to Savvon.

Emerich picked back up and said with the completion of the sale, the school district would need to make some changes.

“We are going to have to figure out where to put the bus barn and maintenance facilities as well as the technology. So, part of our agreement is that we get to keep using the facilities for a time until we can figure this out and build some facilities,” he said.

A committee had been appointed during the Monday, Oct. 25 Board of Trustees meeting and Emerich said the committee will begin to explore the options available to the district.