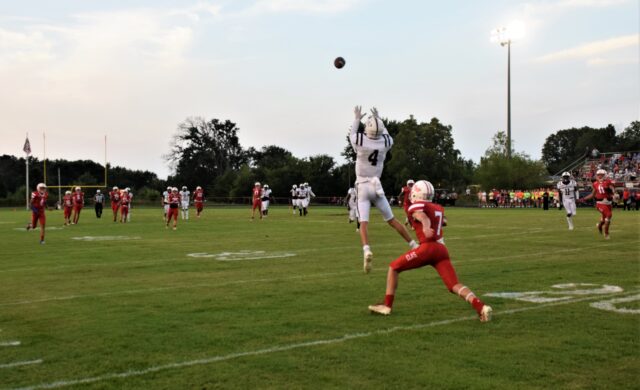 ELKHART – The Grapeland Sandies traveled to Elkhart on Friday night in a renewal of a once bitter rivalry. The Elks and Sandies had not played each other in several years after Elkhart moved up to Class 3A a few years back.

Last year, the two teams met in Grapeland and it was the Sandies who came out on top by a score of 40-29. This year’s game was in Elkhart and the Elks returned the favor, walloping the Sandies by a final score of 40-14.

The game was a lot closer than the score indicated as the Sandies only trailed by seven, midway through the third quarter. Things went south after that, however, as mistakes, penalties and turnovers doomed the Grapeland chances of a comeback.

The game started off well for the Sandies as they took the opening kickoff and drove right down the field for a touchdown. With the ball at the Grapeland 29, Cadarian Wiley picked up nine yards on first down and seven on third down – after an incompletion – to move the ball to the 45.

Riley Murchison opened at QB but moved to receiver and hauled in an eight-yard pass from Johnny Lamb. Wiley picked up five but the Sandies were called for holding. A loss on second down put Grapeland in a deep hole, but the Lamb to Murchison combo paid dividends once again when the two connected on a 34-yard reception down to the 15.

Three rushing attempts by Wiley netted only three yards and forced Grapeland to call a timeout. Faced with a fourth and seven, the Sandies dialed up an end around to Murchison who scampered around the right side of the offense for a 12-yard TD. The two-point conversion was no good but with 6:20 remaining in the first quarter the Sandies led 6-0.

The Elks answered back when they got the ball.  Conner Walker picked up two yards on first down while Cale Starr connected with Landon Thomas for four yards. Walker added another seven to move the ball across midfield while Starr and Thomas hooked up again for another 12 yards.

Starr worked the ball down to the 20 and when he completed a bullet to Chase Walker, the Elks were inside the Grapeland 10. An eight-yard TD by Conner Walker was wiped out by a holding call, but on second and goal from the 18, Chase Walker found the edge of the defense on a reverse and waltzed into the end zone for six. The extra point was no good, but with 1:52 remaining in the first quarter, Elkhart had tied the score at six.

Grapeland’s next possession ended with a turnover as Lamb was picked off by Ch. Walker at the 17 to bring the first period to a close. Two plays later, Cain Foster powered his way into the end zone from five yards out and with the extra point, the Elks took a 13-6 lead with 10:54 left in the half.

Between penalties and turnovers, neither team was able to generate any offense during the remainder of the first half and as a result, Grapeland found itself trailing by seven at the break.

As the second half got underway, it seemed like the Sandies had momentum on their side. The Elks opened with possession of the ball and drove down to the Grapeland 34. The Sandies’ D stepped up, however, and stuffed the Elkhart rushing attack on four consecutive attempts to take over at their own 30.

It looked like the Sandies were in business when Lamb found Murchison for a 33-yard gain to move inside the Elkhart 30, but a pair of illegal procedure calls, along with a delay of game call, forced a punt from Grapeland.

Elkhart took over at their own 17 and following back-to-back 25-yard pickups from C. Walker, the ball was at the Grapeland 33. The Sandies defense stiffened to force a fourth down, but on fourth and three, Starr found Ch. Walker for eight. Two plays later, C. Walker plowed his way into the end zone to extend the Elks’ lead to 19-6. The extra point was no good.

On the ensuing kickoff, the ball landed between several Sandies but when no one in maroon pounced on the ball. As a result, the Elks scooped it up and took over at their own 28. After picking up an initial first down, the Grapeland defense stiffened yet again.

C. Walker was thrown for a three-yard loss on first down and then Starr threw a trio of incompletions to give the ball back to the Sandies at their own 21. Grapeland returned the favor on their next play as Lamb was picked off by C. Walker who returned the ball down to the two-yard line. Starr took it the rest of the way on the next snap as he crossed the goal line with 1:51 left in the third quarter. The try for two was good and with just over a quarter remaining, the Elks now led 27-6.

Following a stop by the Elkhart defense, C. Walker found the end zone once again on a 25-yard run with 9:06 left in the game. The extra point was good and pushed the Elks’ lead out to 34-6.

The Sandies showed a lot of heart following the Elkhart TD. Starting at their own 20, Wiley ripped off a 25-yard gain and followed up with a 55-yard scoring gallop. Omarian Wiley hauled in the two-point conversion from Lamb to make the score 34-14 with 8:34 left in the game.

That was as close as Grapeland would get as Elkhart would add a late touchdown to close out the scoring with the Elks winning big, 40-14.

After the game, Grapeland AD/Head Coach Jordan Wood spoke about his team’s performance.

“First, hats off to Elkhart. They are a very good team, they are very big, very physical and they are well coached,” he said.

“What went wrong,” Coach Wood continued, “is we had over 100 yards in penalties. Then, we had a couple of interceptions and a couple of fumbles. You can’t overcome that many penalties when you’re also turning the ball over. It was little things that are fixable. We just have to come back and pay attention to detail. We’ll bounce back and we’ll be fine next week.”