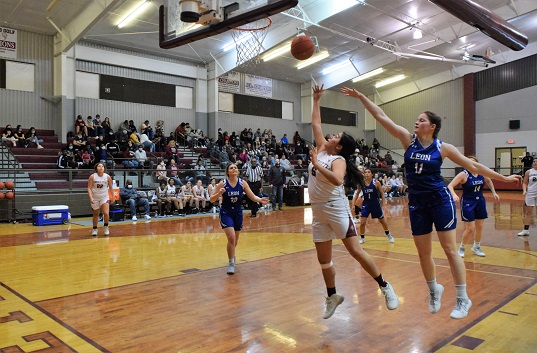 GRAPELAND – The Grapeland Sandiettes are starting to play their best ball of the season and with the playoffs beginning next week, it couldn’t happen at a better time.

Grapeland had rattled off three straight district wins and looked to make it four in a row as the Leon Lady Cougars came to town last Friday. A fast start by the Sandiettes rocked the Lady Cougars in the first quarter and they were never able to recover as Grapeland rolled to a 66-53 win.

As the game began, Sandiettes Christi Shepherd and Te’Lia Arthur came out of the locker room on fire. Shepherd went off for 10 while Arthur had nine. Teira Jones worked inside for four and Mary Jane Watson drilled a three-pointer to help Grapeland take a 26-7 lead after the first eight minutes of play.

Leon’s first quarter points came from Caitlyn Crane with four and Bobbie Guyton with two. In addition, Kassidy Cravey chipped in a free throw to close out the scoring in the period.

The second quarter saw Shepherd continue to dominate the Lady Cougars’ defense as she dropped in another nine points. Jones had five while Cyshia Black made a pair from the line and Watson added one as the Sandiettes opened up a 43-21 lead at the break.

Cravey came alive for Leon in the second with 12 points. Unfortunately for the Lady Coogs, the only other player to score was Alexis Carrizales with two as Leon found itself trailing by 23 going into halftime.

Following the intermission, the Sandiettes kept up the pressure. Every time Leon would cut into the lead, Grapeland would answer right back and took a 25-point lead into the final quarter of action.

Both Jones and Watson netted seven apiece for the Sandiettes in the third. Arthur and Shepherd split the other four points in the quarter as Grapeland pushed their lead to 61-36 with three in the books.

The Lady Cougars tried to match the Sandiettes’ offensive output by shooting from behind the arc. It worked early on as Guyton drained a pair of three-balls but the only other three-pointer in Leon’s attack came from Julie Salley. Crane added four and Cravey had two to round out the third quarter scoring.

In the fourth, Grapeland slowed the tempo way down and only scored five points on a three from Watson and a pair of free throws from Shepherd. Still, it was enough to allow the Sandiettes to hold on for the 66-52 win.

Guyton got hot for Leon with a trio of threes. Carrizales netted three while both Crane and Abbie Young had two apiece to close out the Lady Cougars’ fourth quarter scoring.

On the game, Leon was led in scoring by Bobbie Guyton with 17 points. Kassidy Cravey was just behind her with 15 while Caitlyn Crane was also in double figures with 10. Alexis Carrizales netted five, Julie Salley hit a three and Abbie Young chipped in in a basket to close out the Lady Cougars’ point production.

The Sandiettes were led by Christi Shepherd with a game-high 23 points. Teira Jones poured in 16 while Mary Jane Watson notched 14. Te’Lia Arthur netted 11 and Cyshia Black close out the Grapeland scoring with two.