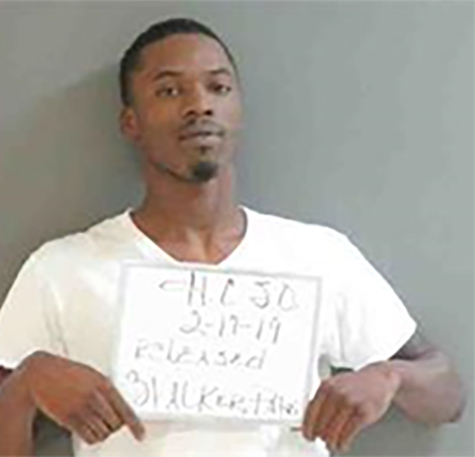 HOUSTON COUNTY – A Grapeland man was arrested on Wednesday, Feb. 27 after he was caught taking a smoke break in Mapleton, west of Crockett.

According to an affidavit of probable cause, 23-year-old Patrick Roushell Walker was arrested and charged with: possession of a controlled substance, penalty group three; possession of marijuana; tampering with evidence; and bringing a prohibited substance into a correctional facility after law enforcement officials were dispatched to Mapleton in reference to a suspicious vehicle.

The affidavit indicated when Houston County Sheriff’s Office (HCSO) Sgt. Mike McCreight arrived at the location of the vehicle, he spoke with the driver who was later identified as Walker.

McCreight reported during his initial contact with Walker, he detected a strong smell of marijuana “… coming from inside the vehicle. McCreight asked Walker if he was smoking marijuana and he replied yes,” the affidavit stated.

While speaking with Walker, the HCSO Investigator observed a baggie containing what he believed to be marijuana hanging out of the pocket of his shirt and placed Walker in handcuffs.

A second container of marijuana was found when Walker was searched. In addition, during a search of Walker’s vehicle, a small pill was discovered which was confirmed to be Xanax.

“Walker was then transported to the Houston County Jail. Once inside the jail, he was searched by jail staff who located four Xanax pills in his shoe along with two buds of marijuana,” the report indicated.

Both the tampering and the prohibited substance charges are considered as third degree felonies.

Walker remains in custody at the Houston County Jail and is being held on bonds totaling $27,000.