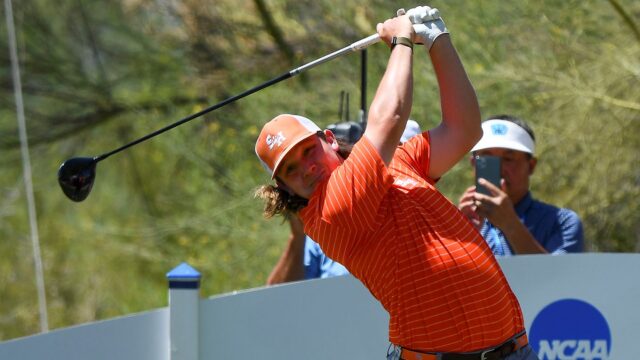 HUNTSVILLE – A historic season for the men’s golf programs just keeps getting better. On Thursday, Golfweek named William Holcomb an All-American, the first in program history.

Holcomb, who was the fourth Bearkat to earn a PING All-Region selection, was named to the Golfweek Honorable Mention team.

“This is a major accomplishment for Will and Bearkat Golf,” said head coach Brandt Kieschnick. “He’s one of the best players in the country and this is a great honor to cap off a historic career at SHSU.”

He recorded seven top-10 finishes this season including 5 top-5s. He posted eight rounds this in the 60’s including a season low 66 at the Louisiana Classics in Lafayette, La. His 70.73 scoring average this season is second in program history to Noah Steele’s 70.42 last season.

He shot par or better 18 times in 26 rounds this season and holds school record 73 career rounds of par or better.

He was in second place at Stillwater Regional before missing final round because of COVID contact tracing. The team ended up finishing fourth to advance to the NCAA Championship.

Holcomb finished his career with a 71.20 scoring average, the second lowest in program history.