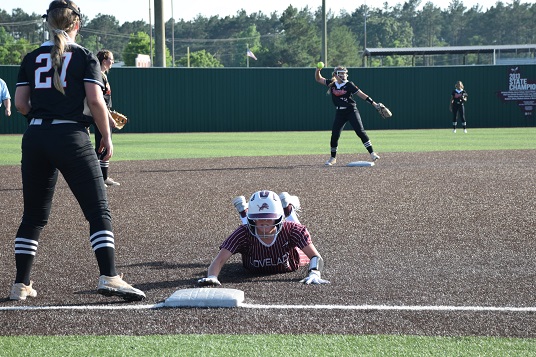 HUDSON – If you like a good old fashioned pitcher’s duel, then Hudson High School was the place to be on Thursday evening as the #5 ranked Lovelady Lady Lions and #1 ranked West Sabine Lady Tigers squared off in Game One of the Regional Finals.

The Lady Lions certainly had their chances, but a strong pitching performance and solid defense from West Sabine proved to be too much to overcome as they fell to the Lady Tigers by a final score of 2-1.

Mimi Sandoval was in the pitcher’s circle to open the game for Lovelady and right off the bat, it was apparent the home-plate umpire had a small strike zone. Halli Hall led off the game for West Sabine and drew a four-pitch walk.

Susan Muncrief followed Hall in the batting order and popped up to short for the first out of the inning. Haley Primrose was up next and she also drew a walk, sending Hall to second base. Sandoval came back to fan Emma Frick, but a walk to Cora Sepulvado loaded the bases. Fortunately, on a 1-0 pitch, Faith Hardy hit a little flare that allowed Bailee Albinus to drift back and catch to end the West Sabine threat.

When the Lady Lions came in from the field, they drew first blood. Scout Lovell led off for Lovelady and she drew a walk. She then stole second, as well as third. Jacy Stubblefield was at the plate, but struck out. Sandoval followed in the order and she also drew a walk as Macie LaRue came in as a courtesy runner.

With Linda Martinez in the batter’s box, a passed ball allowed Lovell to race home while LaRue motored over to third. That was all the Lady Lions would come away with, however, as Martinez was caught looking and Morgan Womack struck out swinging.

In the second inning, the Lady Tigers nearly tied things up. Selina Sepulvado led off the second with a tap back to Sandoval who fired to Haven Prager at first for out number one. Madison Fuller followed her to the plate and hit a blooper just out of the reach of Albinus at second.

Fuller stole second and with Jasee Trowbridge at the plate, Fuller moved to third on a passed ball. Sandoval, however, came back to fan Trowbridge. Hall was up next and drew a walk, but on the play, Fuller strayed too far off the bag at third and was picked off to end the West Sabine half of the second.

Prager led off the bottom of the inning and struck out on three pitches. Erin Sample followed with a ground out to second but Rylee Biedrzycki was up next and drew a walk. Makenna Pierce was hit by a pitch and with two outs, Lovelady had a runner in scoring position. It was not to be, however, as Lovell fanned to end the frame.

West Sabine threatened once again in the third, but once again, Sandoval was able to escape the inning with no damage and preserve the Lady Lions’ 1-0 lead. Muncrief led off with a fly ball out to Pierce in left field. Primrose drew a walk and stole second, but Sandoval got Frick to swing at a pitch out of the zone for strike three. A passed ball with Hardy at the plate moved Primrose to third but – yet again – Sandoval wriggled off the hook as she fanned Hardy to end the top half of the frame.

Lovelady missed a golden opportunity in the bottom of the inning. Stubblefield led off with a bunt single and stole second. With Sandoval now in the batter’s box, a bobble by the West Sabine catcher allowed Stubblefield to race over to third with no outs. However, both Sandoval and Martinez struck out. A walk to Womack kept the inning alive but two pitches later, Stubblefield was picked off at third to end the inning.

A quiet fourth inning gave way to the fifth, with the Lady Lions still leading 1-0. In the top of the inning, however, West Sabine plated two runs to take a 2-1 lead. Hall led off with a deep fly to center that Stubblefield tracked down for the first out. Then, Muncrief got the first solid hit of the game as she roped a 1-1 pitch into the centerfield gap for a double.

A wild pitch with Primrose at the plate moved Muncrief to third while a second wild pitch allowed Muncrief to scamper home with the tying run. Primrose eventually drew a walk, as did Frick who followed her in the batting order.

Coach Jordyn Hester called time at that point in the game and brought in Macie LaRue to relieve Sandoval. A walk to Sepulvado loaded the bases. With Hardy at the plate, a catcher’s interference call pushed Primrose across the dish and gave the Lady Tigers a 2-1 lead.

LaRue shook off the run and retired the next two batters she faced to get out of the bases loaded jam only trailing by one.

The Lady Lions let another opportunity slip by in the bottom half of the fifth. Stubblefield bunted her way on base once again and quickly stole second. LaRue fanned but on Stubblefield’s attempt to steal third, she was gunned down at the bag. Martinez followed with a pop up to second to end the inning.

Neither the Lady Lions nor the Lady Tigers would threaten in the sixth and the seventh inning saw both teams go down in order as West Sabine hung on to beat Lovelady, 2-1, in Game One of the Regional Finals.

Game Two was scheduled for Friday, May 28 at 6 pm, but as of press time a final score was not available.