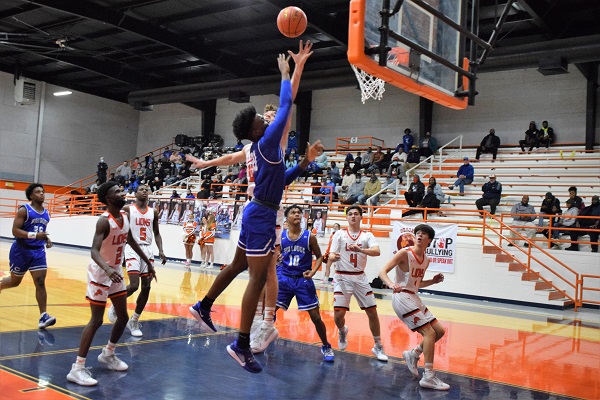 TEAGUE – The Crockett Bulldogs’ roller coaster basketball season rolled on Friday night as the Bulldogs traveled to Teague for a District 20-3A contest.

The Bulldogs have looked strong at times this year but several player and coach issues have started to take their toll. Having said that, Crockett still has a lot of depth and that talent was on full display as the Bulldogs picked up a big road win by a final of 54-36.

As the game got underway, both teams struggled from the field. At the six-minute mark of the first period, however, the Bulldogs forced Teague to commit a 10-second violation which ignited a 7-2 run to close out the quarter with Crockett ahead 14-6.

Courtney Byrd led the charge for Crockett with six points in the first eight minutes of play. Tayshawn Simon and DJ Walker both connected from behind the arc while Bre’Dron Tucker added two on a layup to close out for the Crockett first quarter scoring.

The second quarter saw the Lions’ offensive game start moving a little better. Jehmel Rice found the scoring column with five points in the period while Allison dropped in four. Black made two of four from the line, but Teague found themselves in a double-digit deficit at the half.

Ryley Rischer netted five for Crockett in the second period of play to lead the Bulldogs. Jalen Patton was just behind him with four while both Tucker and Walker added two. Byrd chipped in a free throw as the Bulldogs took a 28-17 lead into the locker room at halftime.

After the break, Walker took over the game for Crockett as he poured in 10 points in the third quarter. Byrd and Tucker both had two apiece while Rischer made one of two from the charity stripe to give the Bulldogs a 43-28 lead after three.

Rice tried to keep Teague in the game with six points in the third, but the only help he got was from Allison with five.

With a 15-point lead, the Bulldogs began to milk the clock while still playing solid defense. Walker continued to find the hoop with four more points. Patton also had four while Tucker closed out the Crockett scoring with a three-pointer.

The Lions were unable to muster any type of a comeback in the final period of play as the Bulldogs held them to only eight points in the quarter. Jacob Callahan nailed a three pointer while Black and Gage Akin both had two points apiece. Rice converted one of two from the line to round out the Teague scoring.

On the game, the Lions were paced by Jehmel Rice with 12 points and Wayland Allison with 11. Byceson Black went for six, Jacob Callahan hit a three while both Gage Akin and Sebastian Carter had two apiece to account for the Teague point production.

DJ Walker led the Bulldogs with a game-high 19 points. Courtney Byrd and Bre’Dron Tucker both had nine while Jalen Patton dropped in eight. Ryley Rischer added six and Tayshawn Simon drained a three to round out the Crockett scoring on the night.