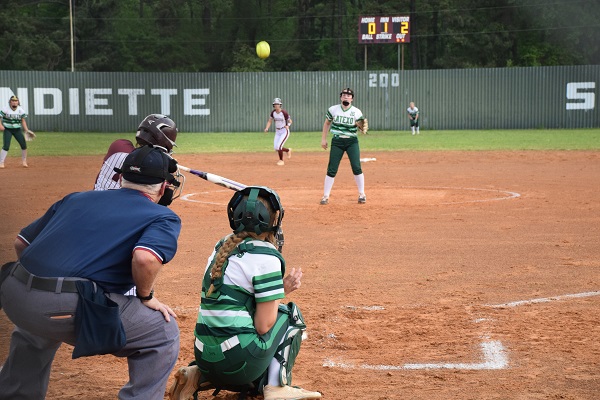 GRAPELAND – The Grapeland Sandiettes welcomed the Latexo Lady Tigers to town on Friday evening for a District 25-2A softball matchup.

Both teams are knee-deep in the playoff race with the Sandiettes holding down the third seed while the Lady Tigers are in a fight with the Slocum Lady Mustangs for the fourth and final seed out of the district.

The game got off to an explosive start and was close until the bottom of the fourth when Grapeland put the game away with four runs to take a commanding lead as the Sandiettes hung on to win by a final score of 10-6.

The Lady Tigers started off fast as they plated two in the top of the first to take an early lead. Charlee Biano drew a walk from Grapeland starting pitcher Jaycee Graham to lead off the game. She then promptly stole second and then third to set up Latexo for a big inning.

Graham caught Shelby Eberts swinging at strike three to temporarily stave off the Lady Tigers’ threat but a double from Natalie Nicol brought in Biano with the game’s first run. Shelby Coker popped up to short for the second out but when the Sandiettes booted a hard-hit ball from Brandie Jackson, Nicol scampered around the bases to make the score 2-0. Izzy Yorgenson followed in the order and tried to keep the Lady Tigers in business, but grounded out to end the top of the first.

Taylor Dise was in the circle for Latexo when Grapeland came up to bat. Dise coaxed the ever-dangerous Kierra DeCluette into grounding out back to the circle for the first out. Makayla McCombs followed DeCluette in the order with a seeing eye single, but Kayleigh Lively hit into a force at second for out number two.

With Lively at first, Graham singled through the infield to move Lively to second. A walk to Jessi Cunningham loaded the bases and brought Haley Boehm to the plate. Boehm settled into the batters’ box and on the first pitch she saw, she delivered a bomb to straight away center for a Grand Slam. Once the ball cleared the fence, the Boehm blast gave the Sandiettes a 4-2 lead.

The homer seemed to rattle Dise, somewhat, as she walked Cheyenne Lomax on five pitches. To her credit, Dise regained her composure to strike out Kalani Barnett to end the inning.

After a quiet second inning, the Lady Tigers tied the game with a pair of runs in the top of the third. Eberts led off the inning with a walk and moved to second on a sacrifice by Nicol. On the throw to first, Eberts slid into third and was ruled safe on a questionable call.

Coker was up next and laid down a bunt which brought in Eberts and cut the lead to 4-3. An error moved Coker to third. Jackson struck out, but a passed ball allowed Coker to sprint home and tie the score. Yorgenson was at the plate when Coker scored but two pitches later, she flew out to center to end the top half of the inning.

The Sandiettes clawed their way back into the lead when they came back in from the field. Lively led off for Grapeland with a double into left and moved to third on an error. Graham popped up to short but Cunningham followed with a sacrifice to drive in Lively. A pop-up from Boehm ended the third inning with Grapeland up by a score of 5-4. It was a lead they would not relinquish.

The Lady Tigers went quietly in the top of the fourth but when the Sandiettes came in to bat, the girls from Grapeland put the game away with a four-run outburst. Lomax singled to right to lead things off and moved to second when an error in the outfield allowed Barnett to reach safely. Anna Cutshaw followed with a bunt single to load the bases.

Following a brief conference in the pitcher’s circle, DeCluette was walked which pushed Lomax across the plate. McCombs was up next and she hit into a 5-2 force at home as Coker gunned down Barnett.

On the play, Cutshaw moved to third, DeCluette went to second and McCombs stood on first. Lively was up next and lofted a fly ball to right that was deep enough for Cutshaw to tag up and score. DeCluette and McCombs also tagged up to advance to third and second, respectively.

Graham was up next and she helped her own cause as she singled into center to bring in DeCluette and McCombs to make the score 9-4. The next batter was Cunningham who grounded out to third to end the fourth inning.

Latexo would scratch out a run in the fifth and another the seventh but it wasn’t enough as the Sandiettes held on to win by a final score of 10-6.

Taylor Dise was saddled with the loss as she gave up 10 runs (six earned) on 11 hits. She also struck out three and walked three.

Jaycee Graham picked up the complete game win as she gave up six runs (three earned) on seven hits. She also struck out six and walked three.

At the plate for the Lady Tigers, Natalie Nicol led the way with a 2-3 night. She also drove in two and scored a run.

For the Sandiettes, Haley Boehm was 1-3 with four RBI on her Grand Slam. She also scored a run.