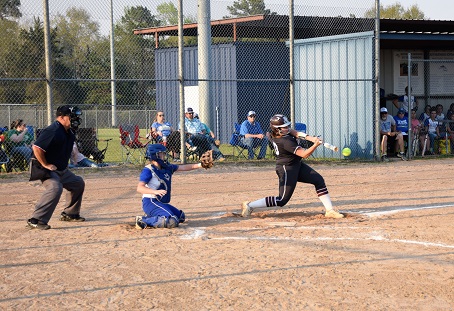 SLOCUM – It has taken a little while this season, but the Grapeland Sandiettes are starting to gain traction as the District 25-2A action begins to heat up and Friday’s match-up against their long-time rival, the Slocum Mustangs was a case in point.

The Sandiettes seized the lead in the first and while the Lady Mustangs managed to tie the score, the Sandiettes never trailed as they run-ruled Slocum by a final score of 16-4.

It didn’t take long for the Grapeland offense to get going. Kiera DeCluette led off the game with a single through the middle of the infield. She stole second, advanced to third on a passed ball and crossed the plate when Kayleigh Lively grounded out to third.

Trailing 1-0 after the top of the first, the Lady Mustangs responded with a run of their own. Jaycee Graham retired her counterpart in Marlee Lasiter when Graham got Lasiter to fly out to left to open the Slocum half of the inning.

A single by Landis was followed by three consecutive errors by the Sandiettes which allowed Landis to come around and knot the game at one.

With runners on second and third and only one out, Graham showed she had what it takes to work her way out of trouble as she got both Jolie Bowman and Lexi Bennett to swing and miss on strike three.

When Grapeland came in from the field, the first two batters in the second – Kamryn Sparks and Haley Boehm – reached on errors. Anna Cutshaw advanced the runners on a sacrifice and then Lasiter walked DeCluette to load the bases.

Makayla McCombs was up next and drove in Sparks from third base. Boehm moved to third, DeCluette moved to second and McCombs reached first safely. Kayleigh Lively followed in the order and roped a single into center, plating Boehm and DeCluette to make the score 4-1.

After Lively’s hit, Lasiter settled down to retire Graham and Cheyenne Lomax to end the Grapeland threat.

Graham returned to the circle in the bottom of the inning and mowed down the Lady Mustangs in order to move the game into the third.

Grapeland padded their lead with a pair of runs in the top half of the third when Cutshaw doubled in Kalani Barnett and McCombs slapped a shot to left to drive in McCombs to make the score 6-1.

The Lady Mustangs would cut the score to 6-3 in the bottom half of the third, but that was as close as they would get as the Sandiettes added four in the fifth and six in sixth to pull away and win by a final of 16-4.

Jaycee Graham picked up the win as she worked six innings and gave up four runs on five hits. She also struck out six and walked one.

Marlee Lasiter was saddled with the loss after she pitched six innings and gave up 16 runs on 15 hits. She also struck out five and walked six.

For the Mustangs, Emma Gibson led the way at the plate as she went 2-3 with three RBI.