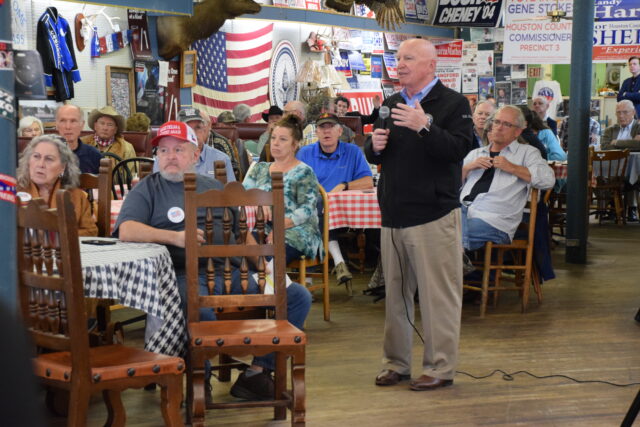 CROCKETT – Congressman Kevin Brady stopped by the Moosehead Café in Crockett on Monday morning, March 22, for a town hall meeting with a number of his constituents.

The congressman is in his 13th term and represents the 8th Congressional District which encompasses all of Montgomery, Walker, Houston, San Jacinto, Trinity, Grimes and Madison Counties. His district also includes parts of Leon and Harris Counties.

Introduced by Houston County Judge Jim Lovell, Congressman Brady said he was glad to be back in Crockett and commiserated with those in attendance in regard to February’s winter storms.

“It was tough on power, on water, on food and everything. In my nine counties, no county had a tougher series of weather when the storms came back through on Thursday. It was brutal for y’all. You found a way to battle through because everyone was pulling together,” he said.

As he began his presentation, Brady brought up employment and said Texas has a target on its back when it comes to the Biden administration.

“Cancelling the Keystone XL Pipeline cost about 11,000 jobs. There are a lot of those here in Texas. I have met with two or three businesses who were planning on hiring 1,000 workers but they didn’t do it because they cancelled the pipeline,” Brady indicated.

“Pausing,” the congressman continued, “But they’re really going to end federal permits for oil and gas on our federal lands and waters. That will cost us about 2 million jobs. Texas will take one of the biggest hits.”

The next topic he touched on concerned the partisanship in Washington. Brady said he was willing to work with anyone but then stated the new administration was the most partisan he had ever seen.

He explained he had voted against the most recent COVID-19 stimulus package because as he said, “… less than a dime out of every dollar goes towards fighting COVID-19 by getting these vaccines developed and out to people across the country, including in rural America.”

He went on to say it was his belief that only three cents out of every dollar went to assist small businesses.

“We have spent so much of your tax dollars right now, spending another $2 trillion – much of what we didn’t need – was the wrong way to go. I not only voted no against it (the latest COVID-19 bill), I managed the vote on the floor (of the House of Representatives) against it because I felt so much of it was wasted,” he said.

Changing topics, Brady addressed the border crisis and said, “I know President Biden is in denial but we have a humanitarian crisis at our border. We have a security crisis at the border. The number of those illegals – kids without their parents or single people coming across the border – that number has surged.”

He explained the reason for it saying the president had stopped construction on the border wall and ended the national emergency on border security.

“This president incited this border surge. He needs to take responsibility. They need to construct the wall; they need to end ‘catch and release’; and they need to reinstate the ‘remain in Mexico’ policy. They need to get back to obeying the law. Last week, Democrats passed a bill to provide amnesty to a whole lot of ‘dreamers’ but with no border security. We have a real crisis at the border. People in Washington just don’t get it,” he said.

Following his presentation, Brady opened up the floor for questions.