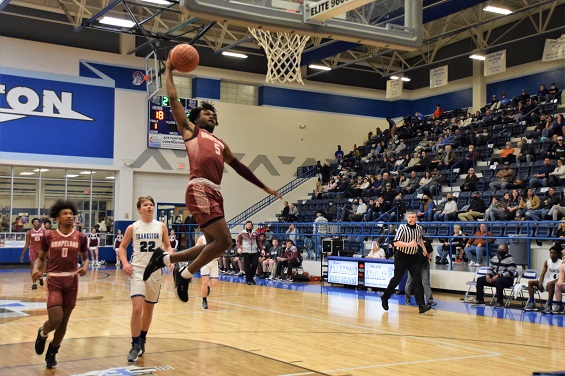 FRANKSTON – For the Grapeland Sandies, the road to San Antonio started in Frankston on Saturday night as the Sandies took on the Frankston Indians.

Originally scheduled to be played in Rusk earlier in the day, a venue change was necessitated after a water main broke. A coin flip to determine where the game would be held went Frankston’s way and as a result the Sandies wound up facing the Indians on their home court.

While Frankston definitely had the hometown fans on their side, in the end it didn’t matter, as Grapeland came out of the locker room red hot from the field and then held off a late Indian rally to pick up the 87-68 win to advance to the Area Championship.

Despite limited practice because of the winter storms, Grapeland shook off the recent frigid conditions with their three-point shooting in the first quarter. The Sandies drained seven three-pointers in the opening eight minutes of the game to take a 29-20 lead after one.

BJ Lamb was flat-out unstoppable in the first quarter. He drilled four threes, threw down a rim-rocking dunk and then buried his fifth three-pointer as time expired in the period for 17 points.

He was joined in the scoring column by Cadarian Wiley with six points while Keizion Ashford and Riley Murchison drained the other two three-pointers.

Kody Loebig helped keep the Indians in the game during the first period of play with 12 points. Cael Bruno added four while Benton Allen and Isaiah Allen both had two.

C. Wiley took over for Lamb in the second. When the Frankston defense started to defend against Lamb’s outside shot, the Sandies would dump the ball down low to Wiley who made the Indians pay with 10 points in the period. Lamb wasn’t through, however, as he added two more threes as part of his eight points in the quarter. Ashford dropped in five and Omarian Wiley added two as Grapeland opened up a 54-32 lead by the end of the first half.

The Indians managed to keep the score from getting out of hand in the second by converting six of eight from the charity stripe. Bruno netted six total points, while Caleb Ramsey had three and B. Allen added two. I. Allen converted one of two from the line to close out Frankston’s scoring in the quarter.

Following the break, the Sandies slowed the tempo down somewhat as they began to focus more on their inside game. Unfortunately for Grapeland, when they downshifted, their play became a little sloppy. A two from C. Wiley and a three from Murchison, however, seemed to right the ship as Grapeland pushed their lead to 73-49 with three periods in the books.

C. Wiley powered his way to another eight points in the third while Lamb continued to frustrate the Indians with six more. As previously mentioned, Murchison connected from behind the arc while Michael Dancer found the scoring column with two.

Bruno paced Frankston in the third with six while Loebig knocked down five. I. Allen dropped in four points while Ramsey added two to close out the period.

As the fourth quarter began, the Indians went on an 11-2 run to make things a little more interesting. Frankston managed to get the lead down to 13 but that was as close as they would get as Grapeland held on to pick up the 87-68 win and claim the Bi-District Championship.

C. Wiley led the way for the Sandies with eight points in the final period of play while Ashford put in four and O. Wiley closed out the Grapeland scoring with two.

Bruno continued to lead the way for the Indians with seven fourth quarter points. I. Allen, Loebig and Ramsey all had three apiece while B. Allen had two and Brink Bizzell chipped in a free throw to close out the Indians’ scoring.

On the game, Frankston was led in scoring by Cael Bruno with 23 points and Kody Loebig with 20. Isaiah Allen was also in double figures with 10 while Caleb Ramsey had eight. Benton Allen went for six and Brink Bizzell added one to account for the Indians’ point production.

Cadarian Wiley and BJ Lamb both had monster games as Wiley poured in 32 while Lamb netted 31. Keizion Ashford was also in double figures with 12, Riley Murchison hit two three-pointers, Omarian Wiley had four and Mike Dancer added a bucket to round out the Grapeland scoring in the game. 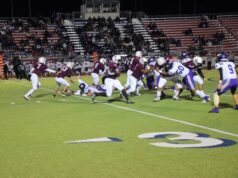 Lovelady Hangs Tough but Falls to Mart in Area