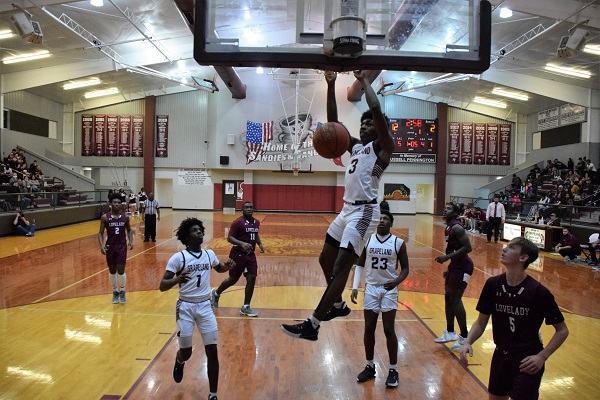 GRAPELAND – In a battle of cross-county rivals, the Lovelady Lions traveled north to take on the Class 2A #3 ranked Grapeland Sandies in a District 20-2A matchup.

The Sandies had clinched the district title last week with a 66-53 win over the Centerville Tigers so it was a perfect trap game for Grapeland. The Lions are in a fight for playoff seeding and wanted to avoid falling to the fourth seed out of the district.

Lovelady’s hopes of catching Grapeland looking past Friday night’s game were ill-advised, however, as the Sandies opened strong and cruised to an 82-49 win over the Lions.

Grapeland opened the game on a 12-2 run which forced Lovelady to take a timeout at he 3:27 mark of the first. From there, the Sandies went on a 10-0 run before settling for a 24-9 lead at the end of first quarter action.

Riley Murchison paced the Sandies with seven points in the early going. Both Keizion Ashford and Cadarian Wiley dropped in six, Omarian Wiley drilled a three-pointer and Michael Dancer added a bucket to bring the first quarter to an end.

Shaun Easterling kept the Lions in the game during the first eight minutes of play with seven points. Cole Harris notched the other two first quarter points for Lovelady.

As the second quarter got underway, Ashford and C. Wiley stayed hot. Ashford poured in seven while C. Wiley netted six.  O. Wiley dropped in four to help the Sandies take a 41-20 lead into the locker room at halftime.

Lovelady spent much of the second period at the charity stripe. The Lions went to the free throw line 10 times in the quarter, but only hit six. Slade Murray had four of the made free throws while Caleb Gilchrist had the other two. The only other made shots for Lovelady in the second came from Harris with a three pointer and Easterling with a two.

Following the break, O. Wiley took over the game as he put in 12 points in the third. Ashford stayed warm with seven while Dancer added two as the Sandies opened up a 62-34 lead with three in the books.

Gilchrist got hot for the Lions after halftime with eight third quarter points. A trio of other Lions – Easterling, Harris and Murray – all had two apiece to round out the Lovelady scoring in the third.

The fourth quarter saw the Sandies try and take as much time off the clock as they could before putting up a shot. Murchison and Cole Goolsby both connected on a pair of three-balls. O. Wiley added another four to his total while C. Wiley and Peyton Prater closed out the Grapeland scoring with two apiece as Grapeland pulled away to win by a final score of 82-49.

The Lions’ fourth quarter points came from Easterling with five while both Skylar Pipkin and Kevion Skinner found the scoring column with four apiece. Murray closed out the period with two.

On the game, the Lions were led in scoring by Shaun Easterling with 16 points. Caleb Gilchrist dropped in 10 while Slade Murray had eight and Cole Harris went for seven. In addition, Skylar Pipkin and Kevion Skinner had four apiece to round out the Lovelady point production.

The Sandies were led by Omarian Wiley who had a monster game with 23 points and 13 rebounds. He also had three assists and five steals. Keizion Ashford poured in 20 points to go along with six boards, five assists and four steals.

Cadarian Wiley worked inside for 14 points as well as eight rebounds, five assists and three steals. Riley Murchison was also in double figures with 13 points. He also had five rebounds, two assists and two steals.

Cole Goolsby drained a pair from behind the arc, Michael Dancer had four and Peyton Prater chipped in a basket to close out the scoring.

Grapeland will be back in action on Friday, Feb. 12 when they take on the Groveton Indians to end the regular season. It will also be Senior Night for the Sandies.