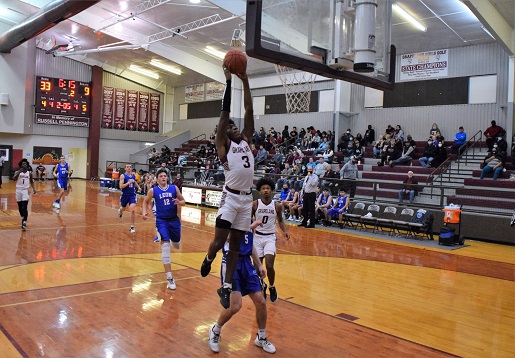 GRAPELAND – The Grapeland Sandies welcomed another member to an exclusive club on Friday night as Cadarian Wiley received his invitation to join after scoring his 1,000th point while wearing the maroon and white of Grapeland.

Friday night’s game also marked the team’s 40th straight district win as the Sandies continue their march towards a 13th consecutive district championship. Grapeland made quick work of the visiting Leon Cougars as the home team opened up a 28-point lead after the first period of play and then pulled away to win by a final score of 80-35.

At the start of the game, Wiley needed 14 points to reach the 1,000-point milestone. Between his work inside the paint and his teammates feeding him the ball when they could, the junior post player took care of business in the game’s opening eight minutes with the needed 14 points.

Teammate Keizion Ashford, who reached the 1,000-point honor earlier this season, had 11 while BJ Lamb, another member of the 1,000-point club netted six. Wiley’s younger brother, Omarian, chipped in the other two as Grapeland took a 33-5 lead at the end of one.

Stran Copeland and Tyson Cornett had two apiece in the first quarter for Leon while Jacob Robinson made one of two from the line.

The Cougars doubled their offensive production from the first quarter as the scored 10 in the second. Tito Gonzalez and Nicholas Leggett both had three while Cornett and Robinson had two apiece to close out the first-half scoring for Leon.

Following the break, the Sandies ramped back up as C. Wiley poured in another nine points. Lamb dropped in six while Ashford put in four. In addition, both Cole Goolsby and Lekerian Smith came off the bench to knock down three-pointers to help Grapeland take a 70-23 lead after three periods were in the books.

Leon saw Tyler Kirschner find his range with a pair of three-pointers while Cornett added a two pointer to close out the third.

As the fourth quarter began, Coach Blake Doughty emptied his bench. Kionte Willis led the Sandies’ scoring attack with five while Smith and Mike Dancer had two apiece. Peyton Prater made one of two from the charity stripe as Grapeland cruised to an easy 80-35 win.

On the game, the Cougars were led in scoring by Tyson Cornett with 12 points and Tyler Kirschner with six. Both Nicholas Leggett and Jacob Robinson had five, Tito Gonzalez connected on a three while Stran Copeland and Tony Gonzalez both had two points apiece to close out the Leon scoring.

Grapeland was led by Cadarian Wiley with a game-high 25 points. He also had six rebounds, two assists and five steals. Keizion Ashford went for 17 points to go along with three boards, five assists and four steals.

Rounding out the Sandies’ point production, both Lekerian Smith and Kionte Willis scored five, Cole Goolsby drained a three-pointer, Michael Dancer had two and Peyton Prater chipped in one as all players on the Grapeland roster scored.