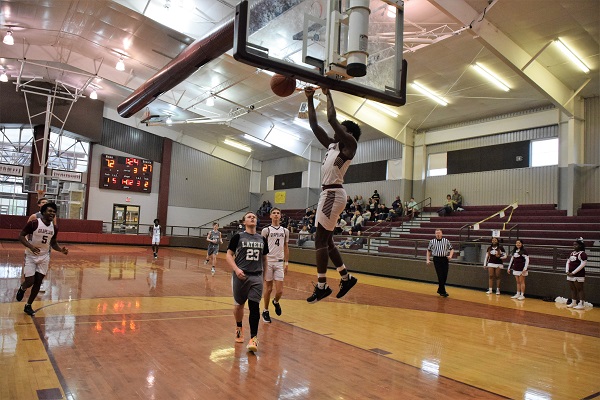 GRAPELAND – In the back end of a home-and-home series, the Latexo Tigers traveled to Grapeland for their second match-up with the Sandies, in as many days. The two teams were in Latexo on Friday evening in Latexo in what turned out to be a hard-fought contest that went the Sandies’ way, 67-48.

The Tigers and Sandies were back on the court Saturday afternoon in what quickly turned into a rout for Grapeland. It appeared as if Latexo had given it their all the night before and had nothing else left in the tank as the Sandies walloped the Tigers, 100-43.

Grapeland jumped out to an early lead and never looked back. The Sandies poured in 25 points in the first eight minutes of play and held the Tigers to seven. BJ Lamb led the charge for Grapeland with 10 points in the early going. Cadarian Wiley worked inside for eight while Mike Dancer drained a three-pointer. Also finding their way to the scoring column were Keizion Ashford and Omarian Wiley, with two apiece.

The Tigers’ first quarter points came from Eli Filer with a shot from behind the arc along with two each from Jack Crow and Logan Ray.

As the second quarter got underway, Ashford took over the game as he netted 11 points in the period. Riley Murchison drained a pair of three-pointers while C. Wiley continued to work the paint for five. Johnny Lamb came off the bench to knock down a three-ball while BJ Lamb converted a pair from the charity stripe to help push the Grapeland lead out 52-19 by the end of the first half.

Ray, who is quietly having an All-District season, started to warm up for the Tigers and dropped in four second quarter points. Filer and Jones both went for three while Tyler Lumbreraz closed out the first half scoring for Latexo with two.

Following the break, the Sandies pulled away from the Tigers. Ashford kept up his torrid pace as he poured in 13 points. C. Wiley added six more to his total while both Murchison and Cole Goolsby rattled home a three to put Grapeland up by a score of 77-28 at the end of the third period.

Jones and Ray both had four apiece for the Tigers in the third while Lumbreraz added three more to close out the quarter.

The fourth period saw the Sandies milk the clock with the reserve players getting the majority of the minutes. O. Wiley led the way with 13 points in the quarter while J. Lamb and Kionte Willis both had three. BJ Lamb and Lekerian Smith closed out the Grapeland scoring with two apiece as the Sandies took down the Tigers by a final score of 100-43.

Ray put in six for Latexo in the fourth, Filer had five and Jones converted a pair of free throws to round out the Tigers’ scoring in the period.

On the game, Logan Ray led the Tigers with a team-high 16 points. Eli Filer was also in double figures with 11 while Sam Jones just missed the double-figure mark with nine. Tyler Lumbreraz had five and Jack Crow chipped in a basket to account for the Latexo point production.

Riley Murchison knocked down a trio of three-pointers while Johnny Lamb drained a pair from behind the arc. Mike Dancer and Kionte Willis both hit from downtown while Lekerian Smith closed out the Grapeland scoring with two.